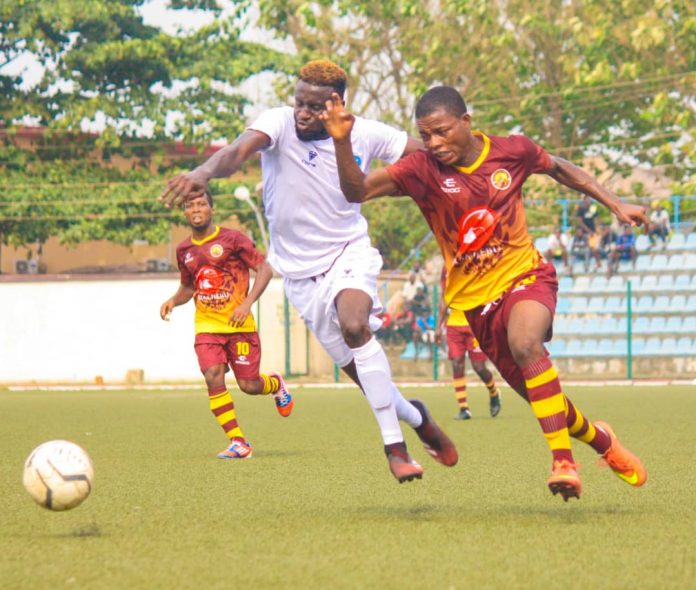 The Oluyole Warriors, turned the game around after the break, as the Edith Agoye led technical crew had to dig deep, making changes that eventually disunited the visitors, who had endured enough to tie the first half goalless.

Both sides came into the game unbeaten in the previous four games and the match did live up to expectations as a local derby, even though the first 45 minutes did not produce much spectacular moments.

In fact for the better part of the first half, 3SC goalkeeper, Detan Ogundare, who had his first appearance of the season and his Osun United counterpart, Okoro Arinze were not really tested .

Osun United chocked up the midfield, thereby not allowing the host from playing their usual free flow game.

However, the tide changed in the second half as coach Agoye and his lieutanants, made triple changes at the start of the second half, bringing in the trio of Opeoluwa Olufemi, Taye Muritala and Osaghae Junior for Chinedu Enuademu, Lamre Ferinyaro and Anthony Okachi.

The changes made the difference as the Omoluabi giants defencelime, made up of ex Shooting Stars’skipper, Seun Akinyemi, Mubaraq Oyelade, Alanj Azeez, Akilapa Olusola and Jerry Okon, found it hard to curtail the Stars.

With incessant pressures, the eventual fall of the Omoluabi giants started in the 60th minute when Gafar Olafimihan out jumped his marker to flick home the ball with his head, a well taking free kick by Malomo Ayodeji.

That goal gingered the Oluyole Warriors as they swooped on the visitors, led by ex 3SC player, Hakkem Olalere, in search of the second goal, which eventually came in the 68th minute when sleeky Malomo waltz his way through the United backline before he delightlfuly slotted in the ball.

Substitute, Hycienth Nwakegwu, who came in for Malomo, made his first appaerance in a competitive game for the Ibadan soccer lords count, scoring the third and final goal of the South west derby in the 86th minute.

Shooting Stars thus made it five wins from five games, 15 points from the available 15, scoring 12 goals and conceeded just one.

Up next for the Stars is another home fixture against Dynamite FC on Sunday.