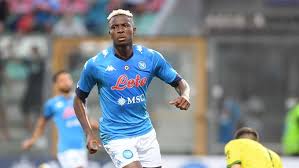 .To miss top of the table clash with Inter

Napoli have confirmed that Victor Osimhen is still training separately and seems set to miss out against Inter on Wednesday’s Serie A tie billed for the Giuseppe Meazza Stadium.

The Nigerian has been out since he dislocated his shoulder during international duty last month and the Partenopei revealed the centre-forward is still out.

“Therapy, work on the pitch and in the gym for Osimhen,” the Azzurri wrote in a training report on their official website.

The 21-year-old has played six games for the Partenopei this term, scoring two goals in the League since his move from LOSC Lille last summer.

Napoli who are third on the league table with 23 points from 11 games will leapfrog Inter Milan (currently second with 24 points from the same number of games) if they are able to secure maximum points at the San Siro.

Coach Bros: How Raising Ahmed Musa made me a Millionaire