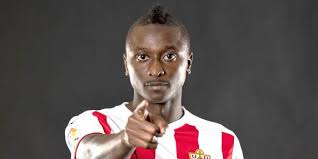 Nigeria scoring sensation, Sadiq Umar continues to give Super Eagles head coach, Gernot Rohr reasons not to overlook him in the forthcoming senior national team’s 2021 AFCON qualifiers with Benin Republic and Lesotho after another goal on Sunday as he helped UD Almeria beat Girona in the Spanish Segunda.

Umar who has being in scintillating form this season following his move from Bulgarian side, Partizan Belgrade scored the only goal of the match in the 77th minute pushing Almeria up the log as they continue to dream for a return to the Spanish top flight next season after they narrowly missed out on qualification last season.

The goal off an assist from Brian Rodriguez made it 14th Segunda goal for Sadiq Umar.

The former A S Roma striker has truly justified the huge amount spent on him before the commencement of the season scoring 16 goals in all competition this season.

The Olympics bronze medalist has had his goals push Almeria to second on the log with 55 points from 28 league games.

He is now in the second position in the race for the best marksman in La Liga SmartBank with 14 goals and he is just a goal behind Raul de Tomas of Espanyol who has 15 goals. Sadiq has played 25 matches in the league alone.