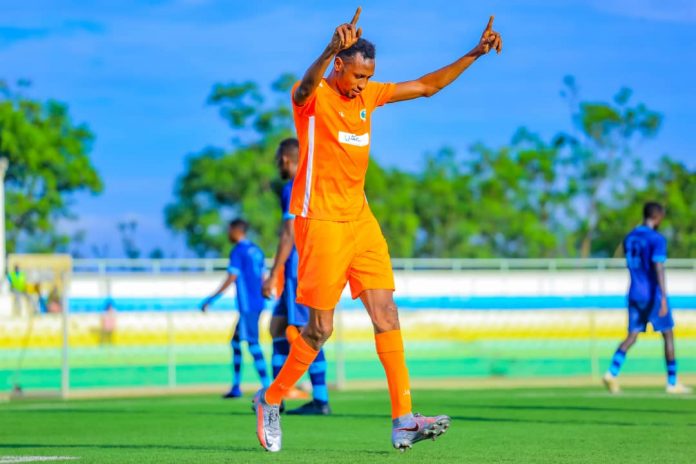 Former Nasarawa United FC’s weapon of mass destruction, Abubakar Lawal, is apparently living his dream life as he is currently turning heads in Rwanda since his switch to Association Sportive de Kigali, shortened as A.S. Kigali, some months ago.

Now nicknamed “the sniper” in Rwanda, the former Nigerian U-20 diminutive attacker took his lethal goalscoring form to the East African Country’s National Premier Football League, where he has been scoring for free in the games he has featured in so far.

Even though the Rwandan National Football League which started on 4th December was halted recently by the country’s authority after three games following fears of the second wave of the global coronavirus pandemic, Abubakar Lawal’s team were exempted from the first two games due to their continental engagement.

The Nigerian, however, produced an assist in his team’s 2-0 home triumph against domestic rivals, Mukura Victory, in the match-day three clash on 10th December.

Lawal’s instinctive status took an astronomical direction when he scored an important away goal against Urapa United FC of Botswana in A.S. Kigali’s 1-2 first-leg away loss in the second tier of CAF’s inter-club competition, the CAF Confederation’s Cup, on 29th November, 2020.

The quick-footed point-man was yet to be satisfied with that performance in Botswana as his onerous desire to lead his team to the next phase of the CAF inter-club competition paid off in the return-leg as he scored the lone goal of the encounter in the regulation time at the thirty thousand capacity historic Amahoro Stadium in Kigali, Capital City of Rwanda.

That goal was enough to guarantee the Kigali-based club advancement to the next round of the continental showpiece, with their next opponents being Ugandan KCCA F.C, short form for Kampala Capital City Authority Football Club, at home in Kigali, on Wednesday, 23rd December, 2020.

Placed second in the goalscorers’ chart in the 2020/2021 CAF Confederation’s Cup with two goals already to his name, just some few minutes separating him from Egypt’s Arab Contractors’ Seifeddine Jaziri(Tunisian) who has the same number of goals, Abubakar Lawal said his aims are both to lift the trophy and become the highest goalscorer in the continental competition.

“My brother, you know how tough it is playing in the continent. But both as a club and as an individual, we aim to lift the trophy and I hope to pick the highest goalscorer gong”, the striker optimistically stated.

The current performance of the Sokoto State-born mobile attacker has endeared him to his club’s hierarchy and team-mates alike, while local media as well as grocery shops idolize him, as his photos are litred across boards.

“You can’t believe I am the ‘main deal’ in Rwanda! My pictures are all over the city”, Lawal revealed.

Among the citizens, Abubakar Lawal gets an audacious reception and cheers each time he steps out into the streets of the President Paul Kagame-led East African Country.

He said due to the hospitality accorded him by the citizens, he is currently learning the country’s national language, the Kinyarwanda, revealing that pressures are, however, mounting on him to naturalise himself to become a Rwanda to enable him play for the country’s senior national team.

The prolific striker joined A.S. Kigali in a two-year deal that will expire in 2022.