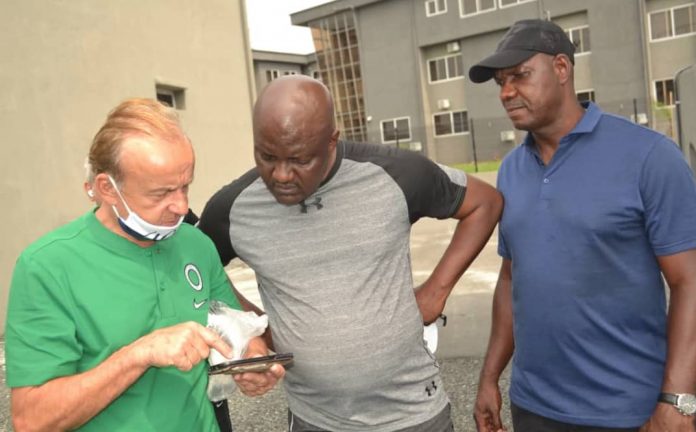 Super Eagles’ coach, Gernot Rohr says the Real Madrid Academy in Port Harcourt can be compared to any of the best academies across the world.

This is just as the Special Adviser to Rivers State Governor on Real Madrid Academy, Barrister Christopher Green, says the state government remains fully resolute in their quest of making the project the best in Africa.

Rohr, who showered encomiums on the structures, intentions, and executions made so far on the prestigious academy, stated this at the weekend when he was shown around the facility by Green.

After a comprehensive tour around the four different blocks of the Academy situated in the same surroundings as the Yakubu Gowon Stadium, Elekahia, Port Harcourt, Rohr could not hold back his admiration for the project and the facilitator, Governor Nyesom Wike.

According to him, “The infrastructures are high level, it’s like in Europe and you can compare with one of the best academies in Europe like they have in Spain; Madrid, Barcelona and Valencia or in France in Paris (PSG) and in Germany in Bayern Munich.

“I think they (Real Madrid Academy, Port Harcourt) are ready to start this programme with these wonderful structures and also with the good pitch. It will be very interesting to see what they can do.

“I think the Governor has done great work and now they have to select the best players and bring some good players in a few years to the future,” said the 67-year old expatriate coach.

Aside from the outdoor facilities comprising of a football pitch and well-constructed swimming pool among others; Barrister Green took Rohr and his contingent round the academic blocks which house classrooms, staff rooms, student hostels, ICT rooms, Biology, Physics and Chemistry laboratories, Dining Halls and other meticulous provisions provided for in the well thought out structure.

Rohr specifically expressed delight in the academic aspect of the Real Madrid Academy.

“What I like is that it is not just football, but there is also the school side. There are teachers who will be coming because you are never sure to succeed in football and if you don’t succeed, there can be injuries, there can be other problems, it is good to have the school side also and that they did not forget it,” he said.

Eguavoen who has coached several Nigerian national teams in the past could also not hold back in his admiration while describing the quality of infrastructure put in place at the Treasure Base of the Nation.

“I am very impressed. What else can you ask for, for football development? Combining education with football is what we’ve been craving for and what we’ve come here to see today is wonderful, it is excellent and hopefully, we will gain from this in time to come.

“I don’t think any other academy will beat this (in Nigeria) except maybe if you come in here and you have an interest and are passionate about what you want to achieve and when you see this, you want to better this. But for now, I don’t think anyone will be able to better it,” he stated.