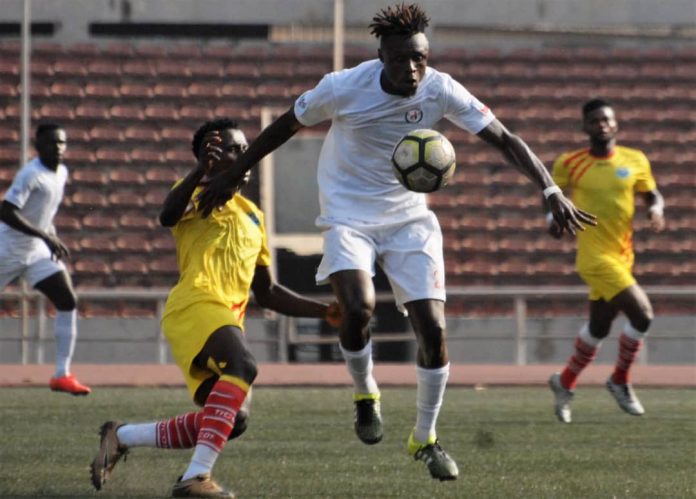 The ‘Flying Antelopes’, Rangers International F.C, Sunday evening inside ‘The Cathedral’, Nnamdi Azikiwe stadium, Enugu, successfully tamed a pack of fierce looking Wolves in the form of Warri Wolves F.C to maintain its winning streak in the ongoing NPFL 2020/2021 season with a 1-0 score line.

Christian Nnaji was the hero of the day for the coach Salisu Yusuf tutored side as his foxlike calmness inside the box after been set up by Israel Abia to glide through a sea of tackling legs and chipped the ball over onrushing Richard Ocheayi for the only goal of the grueling encounter on 17 minutes.

The visitors were the quicker off their marks as referee Salmanu Auwalu signaled the start of hostilities with the trio of Mark Daniel, Jimmy Iteji and Efe Yarhere pulling the strings for the coach Evans Ogenyi side but the Uche John led backline of Rangers did well to contain them even when the visitors had three opportunities in the opening ten minutes to have their noses in front.

At the quarter hour mark, the host would have shot into the lead in their first real threat upfront but Israel Abia’ well struck free kick from the edge of the box missed target by whiskers but there was no stopping the young striker from netting his third goal in two matches two minutes later.

Nnaji could have increased the tally on 23 minutes when he nearly intercepted a back pass but Ochayi reacted well to snuff out the danger while on 36 minute, Abia shot wide off target with options available inside the box just as William Sunday replicated Abia’ missed opportunity at the other end just a minute later for the visitors.

The second stanza saw more intense search for goals from both sides but poor finishing, quality defending and some splendid job from the goalkeepers robbed the game of more goals as Rangers earned their fifth win of the season and move to the third position on the log.

Coach Salisu Yusuf said after the encounter, “It was a difficult match but I am happy we came out with a victory. Warri Wolves gave us a good fight and created chances but we were luckier today. We continue to work and approach every of our match as if it was a cup final.”

Rangers next play away to Abia Warriors F.C complete with 2016 league winning coach for the ‘Flying Antelopes’, Imama Amapakabo in an ‘Oriental Derby’ in a matchday 10 fixture at Okigwe Township stadium.