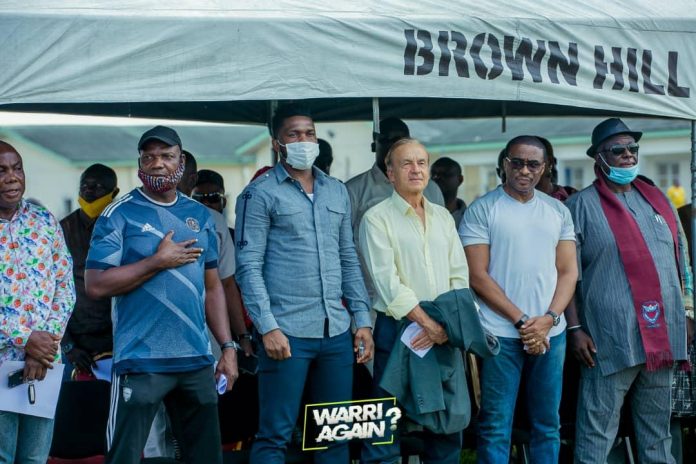 President of the Nigeria Football Federation, Mr Amaju Melvin Pinnick signed off his 50th birthday celebrations in grand style at the weekend with the presentation of a brand new football pitch (complete with a 250-seater pavilion), a volleyball court, and two blocks of classrooms to his Alma Mater, Hussey Model College, Warri, Delta State.

Speaking on the reason for the donation of the sports facilities, Pinnick stated that it is a move to resurrect the glory days of the institution which saw it produce great football stars who had stints with the national teams, and also to encourage the discovery of new talents.

“Hussey College is known to have produced a high number of players for the various Nigeria National Teams in the past but that trend has long ended and the donation and presentation of these facilities is to bring that tradition back. I believe proper education goes hand-in-hand with the development of sports in schools, and that is the reason we have seen school sports help change the lives of so many people,” Pinnick stated.

Also speaking, Governor Okowa, through Olorogun David Edevbie, commended the gesture by Brownhill Foundation and also charged the school to put the facilities into good use and ensure properly maintenance.

“This is a very good gesture and I must commend Mr Pinnick and his Foundation for this laudable project. A lot of people don’t understand what sports have become. In the more developed nations, sport is seen as big business. I believe it is not only Hussey College that will benefit from this project; the whole of Delta State will,” Edevbie posited.

Chairman of the Old Students Association of Hussey College, Emmanuel Ogidi also joined in the commendations whilst encouraging the students to ensure they protect and help maintain the facilities.

Brownhill, through its chairman Andrew Bekederemo used the occasion to announce that 23 students from the college will benefit from scholarships from the Foundation. The foundation also gave out Volleyball jerseys and balls to the school. In a show of appreciation to his chemistry teacher, Mrs. Mercy Onuwaje, who according to him played a major role in his educational development, Mr Pinnick handed her the keys to a brand new car.