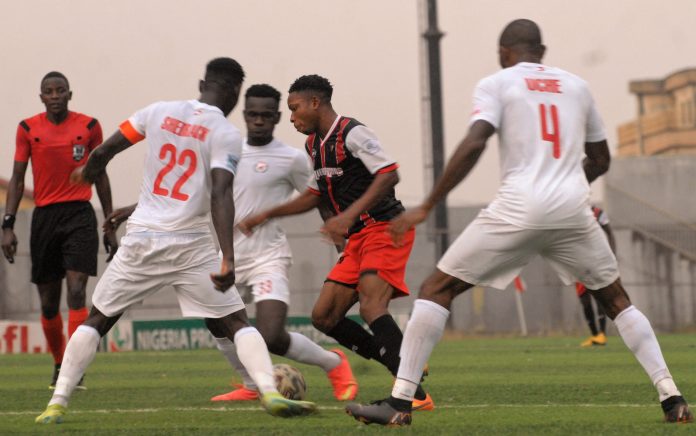 A well struck 25th minute goal by Abia Warriors’ Samson Paul from the edge of the box condemned the ‘Flying Antelopes’, Rangers International F.C to its third defeat of the season in a match day 10, NPFL 2020/2021 fixture played at Okigwe township stadium, Monday.

Despite dominating proceedings for most part of the encounter, the coach Salisu Yusuf wards were found wanting in the third part of the field as the closely knitted backline of the host, ensured that goalkeeper, Ojo Olorunleke was well protected even while playing with a man down for almost half an hour.

The hosts, under former Rangers gaffer, coach Imama Amapakabo, were the first out of the block as the referee signaled the start of hostilities as the raided the backline of the visitors probing for an early lead but Rangers’ defense line ably marshalled by Uche John and Ebuka Anthony stood firm to rebuff the early raids.

In the middle of the pack, the trio of Shedrack Asiegbu, Godspower Tower and Chiamaka Madu were dominant while the duo of Christian Nnaji and Chinonso Eziekwe were limited to few sniffs at the opponent’ goal by the Markson Ojobo led defense.

Eziekwe had tested the backline of the host on 13 minutes but his headed effort was beaten out by an agile Olorunleke while Asiegbu’ long range effort on 29 minutes was also well read by the goalkeeper who parried the goal bound shot for a harmless corner-kick.

At the hour mark, the host were reduced to ten men as Wotlai Daniel received the referee’ marching order but the Enugu landlords could not make the numerical advantage count even with the inclusion of the attacking duo of Ojukwu Ifegwu and Nnamdi Egbujuo on 66 minutes.

After the encounter, coach Salisu Yusuf said, “It was a dominant display but we reacted late in closing down the player that scored the goal and they defended well. We keep hope alive. We keep pushing and believe that we shall achieve our target at the end of the season.”

Rangers will this weekend take on table topping Kwara United F.C in a match day 11 fixture inside the main bowl of Nnamdi Azikiwe stadium, Enugu.