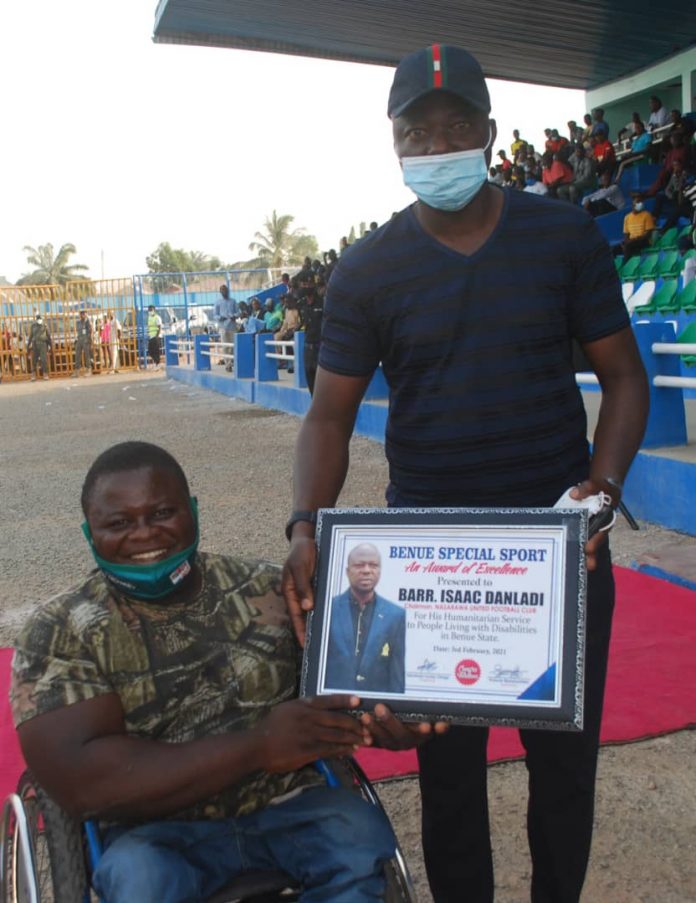 A group under the aegis, ‘Benue Special Sport’ has presented an award of Excellence to the Chairman, Nasarawa United Football Club, Barr. Isaac Danladi.

Performing the presentation ceremony during the half-time period of the Solid Miners’ midweek clash against Enyimba of Aba at the Lafia City Stadium on 3rd February, a game watched by the Executive Governor of Nasarawa State, His Excellency, Engr. Abdullahi Sule alongside other high-profile dignitaries, including the State’s Commissioner for Youth and Sports Development, Hon. Othman Bala Adam, and Comr. Ahmed Yusuf Fresh (Head of NFF Technical and Development Committee) who represented the President of Nigeria Football Federation, Amaju Melvin Pinnick, the group, through its Chairman, Abraham Lucky Onoja, said the award was in recognition of the humanitarian services of Barr. Isaac Danladi to people living with disabilities in Benue, a State that shares many things in common, including borders, with Nasarawa State.

The award recipient thanked the group for deeming him fit for the recognition, saying he was “overwhelmed adding that it would spur him to double his efforts in the service to humanity and society.”