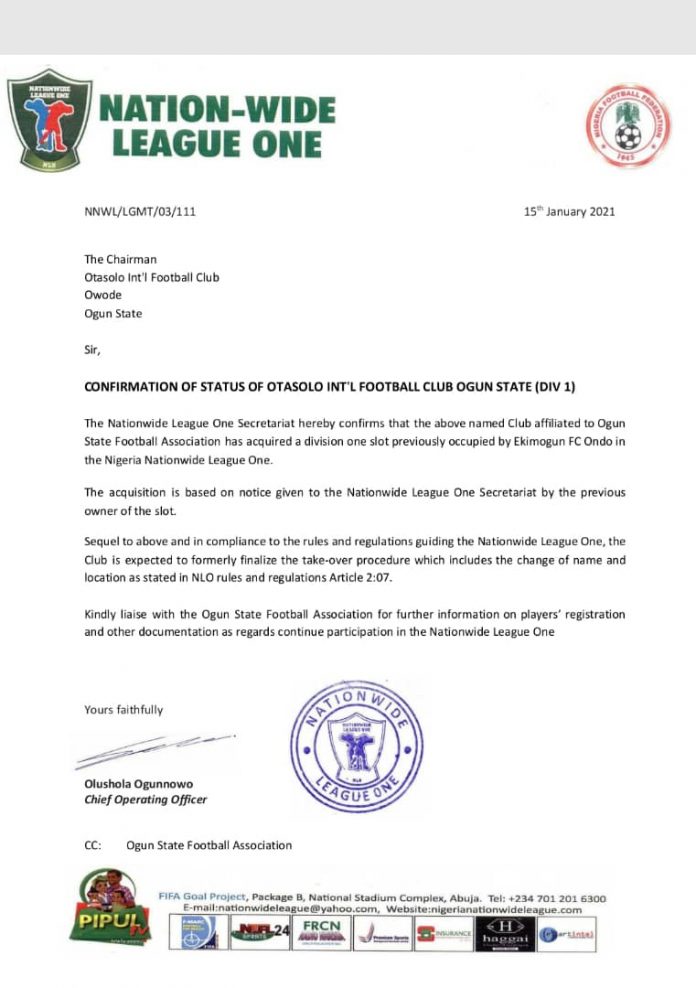 The chairman and proprietor of Ottasolo FC, Gabriel Davies has scored another goal by acquring a Nationwide League one slot for his team that shone like a million Stars at the Governor Wike Pre-season Tourney in Port-Hacourt two months ago.

Gabriel who is a former footballler has invested his time and resources on Ottasolo Football club that is gradually carving a niche for itself as far football is concern in Nigeria.

According to Gabriel Davies while speaking to Ottasolo media department following the acquisition of a Nationwide League One slot formerly occupied by Ekimogun FC of Ondo.

“I think my commitment is very clear which is is to give back to the society that i benefited from while growing up.

“I know how tough it his to become a professional footballer in Nigeria, that is the more reason why i have decided to invest my time and resources on a football team that can easily pave way for talented young footballer roaming the street. The chairman clarified.

“You could see our little achievement at the Wike Tournament in Port Harcourt, despite not having enough time to train together as a team, Ottasolo FC won the best team of the tournament and three of our players joined NPFL sides and two joined NNL sides.

“I am very happy with what we have achieved thus far and we will continue to build on our little achiements.

“We have successfully acquired a Nationwide League One slot and we will give it our all to ensure that we prove to football enthusiasts that we are team to beat.

“We have not acquired the slot just to complete the numbers rather to play and win. Davies concluded.

Ottasolo FC participated at the Wike Pre-season tourney in Port Harcourt and gave NPFL sides such as Lobi Stars, Rivers United run for their money