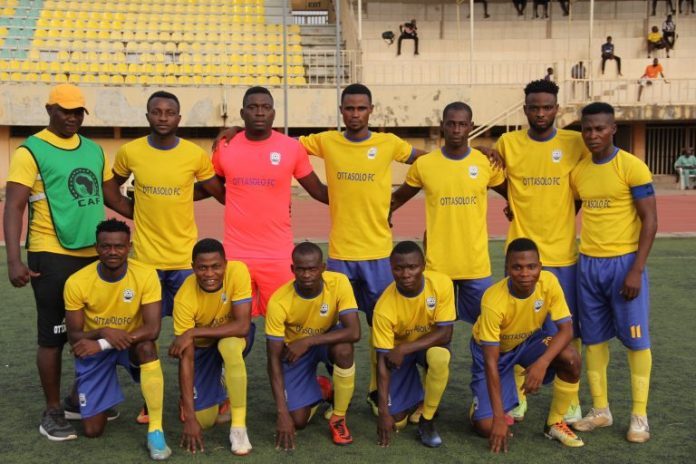 Ottasolo cruised to the top of the league table as they maintained their 100 percent winning record when they defeated EKSU Galacticos 1 – 0 in the ongoing NLO at the Kwara State Sports Complex in Ilorin.

The Lagos based team who are yet to drop point in the ongoing Nationwide League One tournament have now won five out five games played.

Mercurial midfielder Samuel Ogunjimi scored the lone goal in the 33rd minute to ensure that the Solo Boys run away with the maximum points to return to league table summit.

Ottasolo Boys started the game on a very poor note as they looked jaded and ordinary, thereby giving their opponent opportunities to control the tempo of the game in the early minutes

However, Coach Olufemi Elijah boys woke of from their slumbers and could have scored on 5th minute but Mouri Ogounbiyi’s diving header could not trouble EKSU goalie who made a comfortable save.

Despite enjoying more of the ball possession, Ottasolo Boys could not transform their dominance into goal scoring as their opponents stood firm to thwart every attacking threat thrown at them.

Samuel Ogunjimi would later break the deadlock on 33rd minute to put Ottasolo ahead with a cool finish off a well crafted pass by Adebayo Adewale.

The University Boys had a golden chance that could have put them back in the game on 43rd minute but Ottasolo goalie, Kuye Ibrahim came out big to deny Oluwatayo Ifeoluwa from point blank.

The resumption of the the second 45 minutes witnessed some substitutions from both teams.

It was Ottasolo that created the first clear cut chance in the second half on 61st minute when Mouri Ogounbiyi put food on the plate with a lofty and intelligent cross into the area of the opposition, striker Adeshina Ridwan connected well but his final touch could not find the target.

EKSU goalie, Ogungbade Tomiwa who was busy throughout the game made another clever save on 82nd minute when he parried a goal bound effort by Ridwan Adeshina to corner

Moshood Jelili who was a rock solid in the defense of Ottasolo was adjudged as man of the match.

Ottasolo will face Remo Stars in their last match of the group Wednesday, 17th March, 2021 by 4pm at the Kwara State Sports Complex in Ilorin