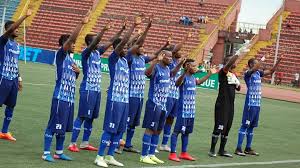 10 man Rivers United continued their winning streak in the Nigeria Professional Football League (NPFL) 2020-21 season after they defeated hard-fighting Abia Warriors by a lone goal at the Enyimba International Stadium, Aba on Saturday.

The Pride of Rivers’ solitary goal of the game came in the 20th minute when Fortune Omoniwari chested the ball and aimed a piledriver at the bottom right corner of Abia Warriors’ goalkeeper, Ojo Olorunleke whose outstretched hands couldn’t stop the ball from sailing to the back of the net.

The goal was as a result of intense ceaseless wave of attack launched on the home team and after some spirited defending to prevent an early goal, Abia Warriors defence marshalled by Adeleke Adekunle and Markson Ojobo were unable to stop Omoniwari from scoring his second goal of the season.

Abia Warriors head coach, Imama Amapakabo opted for Olorunleke in goal while Innocent Gabriel, Ozioma Goodluck, Markson Ojobo and Adekunle were preferred in the defence. Fatai Abdullahi and Nzube Anaezemba tried to control the midfield while Samson Paul and Arit Achibong operated in the wing to supply incisive crosses to the opposing territory.

Rivers United manager, Stanley Eguma on his part decided to rest Theophilus Afelokhai, Ifeanyi Anaemena, Godwin Aguda, and a host of others because of the upcoming CAF Confederation Cup first round, second leg tie against Bloemfontein Celtic on Wednesday in Port Harcourt. But the players that stood in for them gave a good account of themselves throughout the course of
the game.

It was the visitors that launched the first real attack immediately Omoniwari kicked off proceedings but they were repelled by Abia Warriors who had Anaezemba in the best form of his life in the midfield.

Abia Warriors had occasional moments of theirs too to punish Rivers United but their strikers were goal-shy and also jittery in the final third which made Abiodun Akande be more of a spectator for the most part of the game.

Rivers United grabbed the only goal of the game in the 20th minute through Bakary Bamba’s incisive footwork. The Port Harcourt side had been tormenting the goal area of Abia Warriors before then and when Bamba floated a pass to Omoniwari, the ex-Akwa United Attacker received it with calmness and picked his spot perfectly before unleashing a ferocious shot that the home team goaltender, Olorunleke was unable to stop.

Abia Warriors battled hard to get the equaliser but because of their lack or coordination in the attack, they were unable to get any clear cut chances until the referee signalled it was time to proceed on half time break.

Abia Warriors continued from where they stopped in the first half and Anaezemba, Paul Samson and Fatai Abdullahi tried to create a goal scoring opportunity in the 51st minute but Rivers United’s Austin Festus and Lookman Binuyo were solid in the defence to foil their attempt.

Chukwuemeka was also close to getting the equalising goal in the 60th minute after a good work from Tekena Gorando in the right hand flank. Gorando forced himself into the 18 yard box of Rivers United and gave a good pass to Chukwuemeka but the badly positioned former Heartland Striker tried a cheeky backheel which goalkeeper Abiodun Akande pushed out for a corner kick.

It was the turn of Rivers United through Bakary Bamba to torment the home team in the 63rd minute. The Ivorien dribbled his two Abia Warriors markers but he was stopped by Abdullahi before he could pose any danger to goalkeeper, Olorunleke.

The game took another dimension in the 73rd minute when Rivers United’s Nelson Esor received his second caution of the game for a two footed lounge on Abia Warriors’ Abdullahi. He was earlier booked in the 29th minute for his ill-timed tackle.

Abia Warriors threatened thereafter all to know avail to get the leveller with Rivers United electing to stay put in the defence to keep their lead. They still had a final chance in the 89th minute when a well floated cross was nodded powerfully to the sight of goal by Adekunle but Akande managed to tip it to the frame of the post.

Umraniyespor 2-1 Keciorengucu: Olawoyin scores 7th goal of the season in...