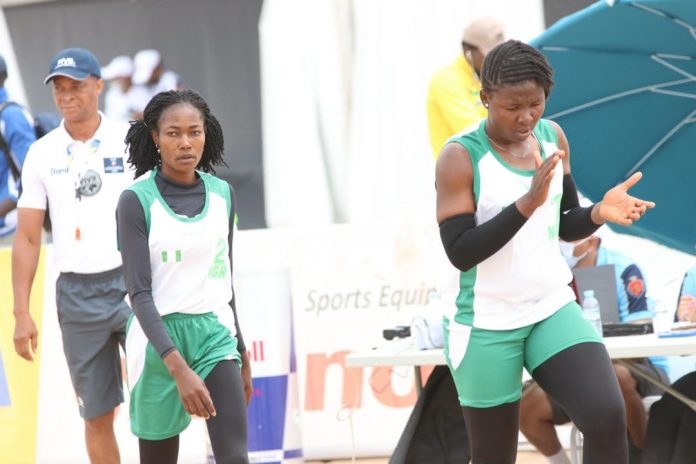 Nigeria women’s team is through to the quarter-finals of the Tokyo Beach Volleyball Qualifiers in Agadir, Morocco.

Nigeria will face The Gambia today in one of the quarter-finals in its bid to qualify for the Tokyo Olympic next month.

Nigeria faced Cape Verde in a great Pool B showdown; both side enforced power, technique and skills but it was Nigeria who stole the show in the golden match after a hard fought 2-1 win.

The eight teams through to the last eight of the CAVB Continental Cup for women include Morocco, Mozambique, Egypt, Rwanda, Kenya, The Gambia, Nigeria and Cape Verde.

Meanwhile, Nigeria men’s team has crashed out of the beach volleyball qualifiers despite beating Mali 2-1 in the third Pool B match.

In pool B Kenya set a ground breaking victory over Mozambique in one of the competition’s best face offs which extended to a golden match after Mozambique won the first match 2-1 before Kenya neutralised winning 2-0, then they won the tiebreaker 2-1. Kenya and Mozambique qualified, while giants Nigeria were eliminated.

The top eight line up confirmed at the Men’s Continental cup after Morocco, Tunisia, Kenya, Mozambique, Ghana, Egypt, Gambia and Rwanda made it to the single elimination chart after they finished on top 2 position in each of the four preliminary pools.