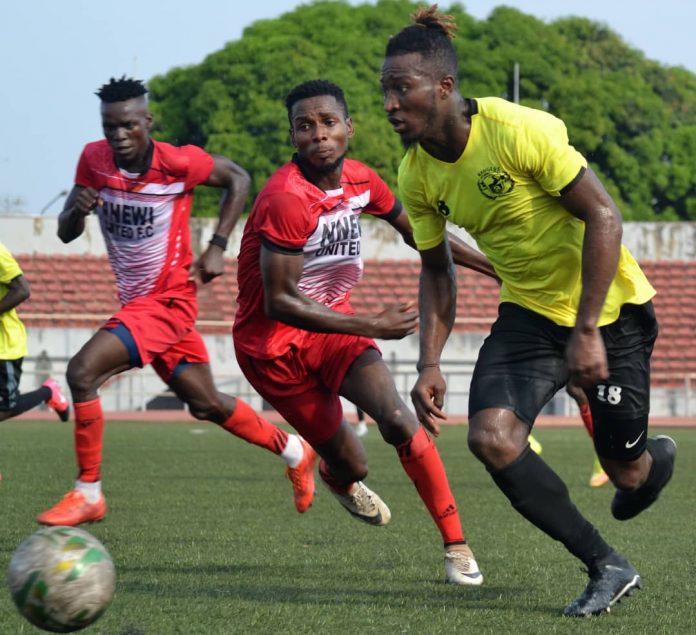 The right-wing-back received a defense splitting pass from mid-field maestro, Tony Shimaga, and went on a dribbling run that saw him ghost past three markers to release a canon-like shot from an acute angle which zoomed into the net past a bewildered, Chisom Chiaha who stood between the sticks for the visitors.

Chances were far apart for the premiership side as the Nnewi side marked and choked the players of Rangers for space with their robust marking.

Birthday boy and top scorer for last season, Israel Abia, came close to increasing the tally on 34 minutes but his shot was smoothed by the young goalkeeper.

The introduction of the quartet of Shedrack Asiegbu, Esor Achibong, Ajayi Femi, and Christian Nnaji, upfront, in the second stanza helped in pushing the visitors back but the chances created could not be turned into goals even as a defender, Uche John had a golden opportunity to double the lead on 80 minutes but indecision in front of a yawning net meant the game ended in a 1-0 scoreline.

Speaking after the encounter, match winner and captain of the side, Tope Olusesi said, “It was a very tough match but we showed our desire to win and got the win. We thank God for the win. I dedicate the goal I scored today to my teammate, Israel Abia, who we celebrate his birthday today. We hope to improve our performance in future matches.”

My Mantra Has Always Been to Give Sports and Youth Same...