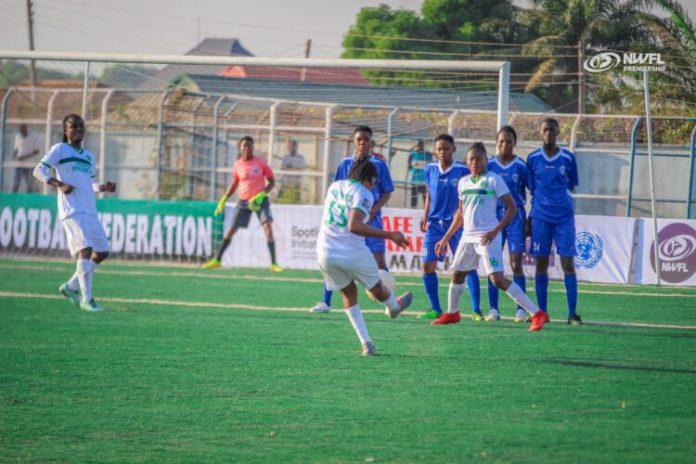 The 2020/2021 Nigeria Women Football League (NWFL) Premiership had a glorious commencement across seven centres with 19 goals recorded in the opening fixtures of the season played on Wednesday and www.dasportstainment247.com has complied the highpoints of those games.

The Matchday One recorded two away wins with Osun Babes stopping Ibom Angels at the Godswill Akpabio Stadium, Uyo while FC Robo Queens made it a day to forget in a hurry for Nasarawa Amazons who were beaten at the Lafia City Stadium even in the presence of the wives of the Governor and his deputy. Only a draw was recorded while four home teams successfully delivered crucial wins in front of their fans.

The official opening game of the season saw Lagos based FC Robo Queens securing a 1-0 win over Nasarawa Amazons at the Lafia City Stadium. Nasarawa State First Lady, Hajia Silifat Sule and wife of the Deputy Governor were both in attendance in the surprise home loss. Shobowale Rukayat scored the winning goal for FC Robo Queens in the 32nd minute to ensure that the visitors return to Lagos with the full points.

The second away win of Match Day One saw the Omoluabi Queens who have proved to be the bogey team of Ibom Angels in Uyo beating their hosts at the Godswill Akpabio Stadium, Uyo on Wednesday. Flamingos leading markswoman, Yemisi Samuel scored the winning goal for Osun Babes in the second half to make it a rewarding trip once again. The Omoluabi Queens have started the current season impressively unlike the last when they struggled from the beginning.

The clash of the top two clubs in the 2018-2019 season ended in a 1-1 draw. Before the start of the game Rivers Angels’ Head coach, Edwin Okon had clamoured for the return of Secret Match Assessors to curtail the underhand tactics of the home teams to win at-all-costs. Glory Edet put Confluence Queens in the ascendancy in the seventh minute but Regina Otu restored parity for Rivers Angels in the 14th minute and it was how the game ended in Lokoja.

Margaret Ademulegun’s free kick in the 15th minute handed Abia Angels the crucial lead before Jane Abraham doubled the advantage in the 47th minute to give the host a 2-0 win over the once dreaded Pelican Stars who are living only on past glories due to paucity of funds and lack of adequate attention from the Cross Rivers Government.

Delta Queens joined Edo Queens as the biggest winners of Match Day One after their 4-1 win over DreamStar FC of Lagos. Odubanjo Dominance dominated DreamStar with the opening goal in the ninth minute for Delta Queens. Iyasere Gift and Odubanjo (for her second of the game) ensured that the Okowa Girls were 3-1 at halftime with the second and third goals in the 11th and 36th minutes.

2017-2018 Champions, Bayelsa Queens secured a slim 2-1 home win over Sunshine Queens at the Samson Siasia Stadium, Yenagoa. Joy Jerry scored the first goal of the game for Bayelsa Queens in the 27th minute. Precious Vincent got the second goal for the host before Fakunle Seun reduced the deficit for Sunshine Queens in the 41st minute after goalkeeper Onyinyechi Okeke’s howler. The Restoration Ladies won with Governor Douye Diri and other important dignitaries at the stands.

The final game of the day which was played under floodlights at the Samuel Ogbemudia Stadium, Benin City saw Edo Queens troucing newcomers, Royal Queens 4-1. It was a baptism of fire for Royal Queens in the South-South derby as two goals in the space of three minutes by Tessy Biahwo propelled Edo Queens to a 4-1 win.