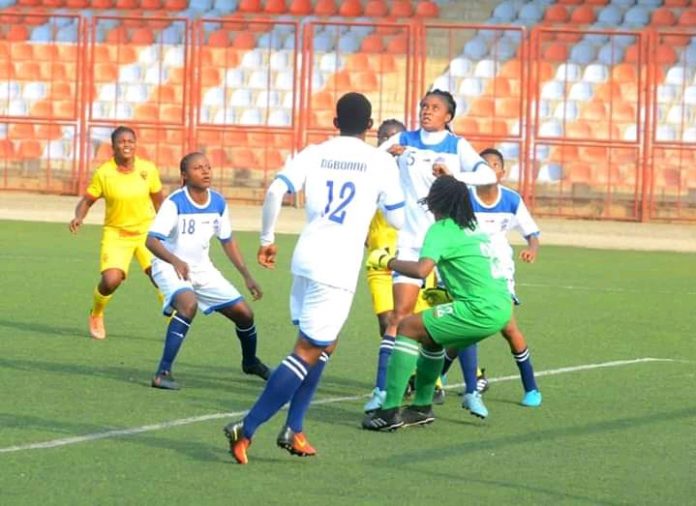 Www.thenwfl.com in partnership with www.dasportstainment247.com relive how the Matchday four games went.

The only goalless match of week 4. Edo Queens departed Benin with high hopes of picking valuable points in Akure. The ‘Betty’ babes started slowly in the game and paid for it as Edo Queens rattled their way through early in the game, but never saw the back of the net.

The Obaseki Ladies created many goalscoring chances, but were unlucky not to have led in the game. The 0-0 scoreline was indeed a disappointing result for the host, however they will be looking forward to covering up when they face Abia Angels next week in Umuahia, while Edo Queens will be welcoming Nasarawa Amazons to the Samuel Ogbemudia Stadium, Benin.

Olayinka Adunola’s side were very unlucky to lose at the dying stages against Royal Queens at the Warri Township Stadium.

Osun Babes started the match with some intensity and could have scored early in the game, but after that brief spell, they fell short and found it hard to get their rhythm back until later on in the game.

It was the second win for Paul Mene and his players. Olayinka Adunola will be pushing for a win in their next game against Dreamstar Ladies in Osogbo.

A well-drilled Dreamstar Ladies team got a very deserved rare win at the Agege Township Stadium against an Ibom Angels side who fought so hard all through the game.

Anuoluwapo Salisu’s brace from the spot gave the ‘Galaticas’ the needed victory after Uduakaobong Peter and Blessing Nkor had scored earlier for the ‘Orange’ Ladies.

With this win, Dreamstar Ladies will surely go into their next game against Osun Babes brimming with confidence, while Ibom Angels will welcome Rivers Angels to their home at the Godswill Akpabio Stadium, Uyo.

Rivers Angels got their second victory of the season at home against a very stubborn Abia Angels side.

Unexpectedly, the first half ended goalless, which got the Edwin Okon furious and uncomfortable during the break. However Deborah Abiodun’s 54th minute effort got them on track before Vivian Ikechukwu doubled the effort in the 90th minute.

Having won three games on the bounce before this encounter, Bayelsa Queens were optimistic of a victory, but it wasn’t easy as they fought hard to come from a goal down after Nkechi Agams had gotten the visiting side off a flying start when she netted her first goal of the season in the 10th minute.

In-form forward Joy Jerry drew level in the 43rd minute before Anjor Mary scored from the spot in the 65th minute to give her side the needed victory.

Confluence Queens will welcome FC Robo in their next game, while Bayelsa Queens will travel to Agbor to face Delta Queens.

Nasarawa Amazons recorded their first victory of the season and it was against a Delta Queens side who have now lost their two away games this season.

Christopher Danjuma and his girls were under intense pressure before the game, having lost their first three matches of the season.

Chinyere Igboamalu’s 41st minute strike was all Nasarawa Amazons needed to move away from the relegation zone.

Another defeat for Pelican Stars on the road and another big win for FC Robo Queens on their home ground in Lagos.