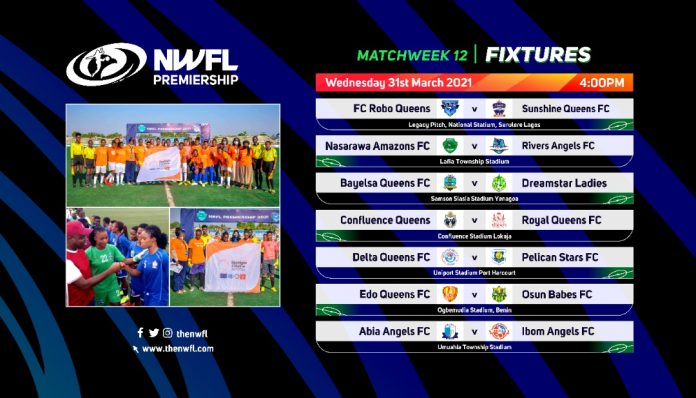 The Jewel of Rivers are without a win in 3 consecutive matches now and have dropped to 3rd place on the NWFL table, 6 points behind Bayelsa Queens who currently lead the log.

After dropping their first points at home in a game against Sunshine Queens a fortnight ago, the Port Harcourt side will need to redeem themselves by ensuring they get something off Nasarawa Amazons on Wednesday.

This position doesn’t seem to please Rivers Angels forward, Oghenebrume Ikekhua but she’s still confident her side can turn things around, especially in the second round of the season.

“It’s not a good one but I know we can still come up on the table,” Ikekhua said.

“This is just the first round, there are still games to play in the second half of the season.

“We are in Lafia for a win but if we get a draw, it will be a good result for us.

“But we are mainly here to get all three points because that will spur everyone going forward,” she added.

On her part, Rivers Angels midfielder, Regina Otu says the team will give it their all come Wednesday in Lafia.

“We are in Nasarawa to play as a team and not as individuals because we know our current position isn’t a good one,” said Otu.

“The team is known for being at the top and that is where we are aiming at.

“Yes as a player you either, lose, win or draw a game but no one wants to lose and that is just the mindset right now.

“Nasarawa Amazons is a good team but I believe we can get a good result if we play well,” she summed.

In other matches slated for today, Osun Babes will seek a return to winning ways after they were pipped 1-0 at home by Delta Queens in an alleged controversial tie played at Oshogbo last week. They have slipped to the ninth position with 14 points from as many games.

With Rivers Angels involved in a tricky tie in Lafia against Nasarawa Amazons, Bayelsa Queens will fancy their chances of extending their six points lead at the top if Delta Queens, who are presently second on the log with 23 points from 11 games, stumble at home to Pelican Stars. The Restoration Ladies are at home to bottom placed DreamStar Ladies. An upset is quite unlikely at the Samson Siasia Stadium, Yenagoa.