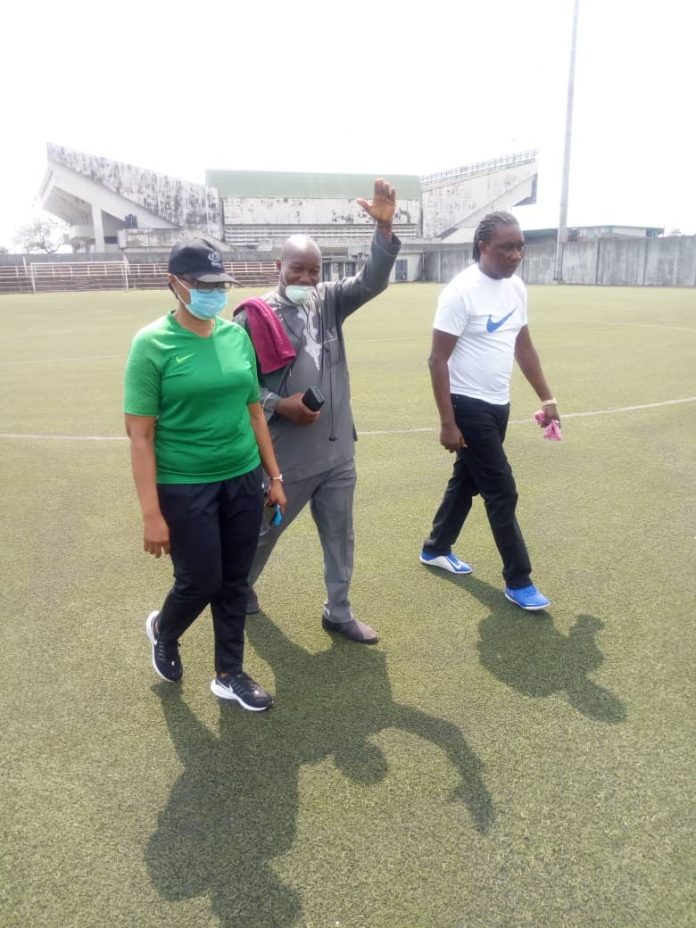 The Chairperson of the Nigeria Women Football League, Aisha Falode, was full of plaudits for the leadership of the Lagos State Football Association, headed by Barrister Seyi Akinwunmi, for keeping the facilities at the Legacy Stadium intact, at international standard.

Falode, was taken on tour of the stadium Thursday afternoon, during her inspection exercise at the Lagos stadium by Technical Director of the Lagos FA, Dotun Coker.

The Chairperson noted that, the Lagos FA made the job of the NWFL easy as the venue was by all standard ready for the kick-off of the 2020/2021 NWFL Premiership season.

Falode stressed that: “Over the years, Lagos has been one of our best league venues, and from all indications, they have maintained this standard.
“From the state of the facilities at the Legacy Stadium, located inside the National Stadium, Lagos, it was evident that, despite the inactivities caused by the COVID-19 pandemic, the facilities at the stadium were still in great condition, a clear indication that, it was not neglected, and would enable FC Robo play all it’s home matches seamlessly.”

The NWFL Chairperson added that: “Reports from across the various designated venues inspected by the Technical Committee of the NWFL, were favourable, which means that, all fixtures drawn for the Week One would be played without delay or hindrance, a great indication of what to expect in the more tasking straight league that would see the premiership teams play 182 matches over 26 weeks. The league from the schedule would go on break in Week 13, in March 2021, giving all the 14 clubs the opportunity to buy news players and transfer their players in open market.”