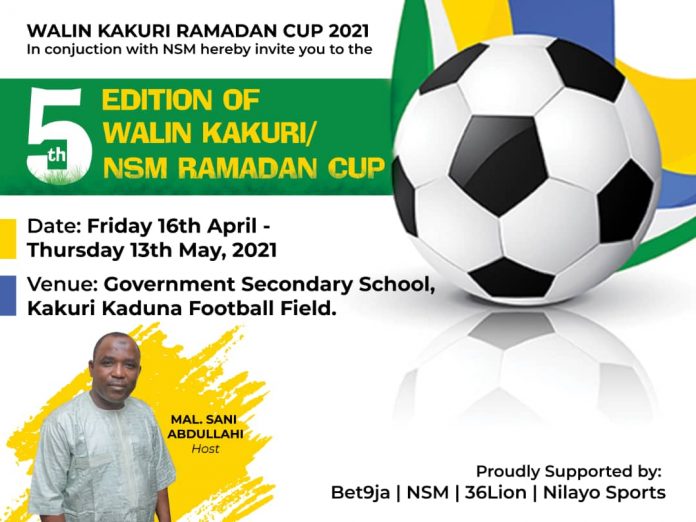 YMCA FC has qualified for the semi-final of the
NSM/Walin Kakuri Ramadan Cup to become the last team to hit the last four after a close 1-0 defeat of Court FC in a game played at the Government Day Secondary School, Kakuri, Kaduna State on Sunday www.dasportstainment247.com can report.

YMCA FC only got to the quarter-final stage as lucky loser after they were beaten in the first round by FC Porto 4-3 on penalties after the regulation time ended goalless but they are in the semi-final now due to the organisers’ waiver and their victory over Court FC.

Moses Elijah’s well dispatched penalty kick in the 52nd minute for YMCA’s lone goal proved to be the difference and the team is only two matches away from winning the 5th edition of the 2021 NSM/Walin Kakuri Ramadan Cup.

You will recall that Zebra FC booked the first flight to the last four after a pulsating penalty shootout win over FC Porto. Both teams were locked at a 1-1 draw at the end of the regulation time before Zebra FC managed to pip FC Porto 9-8 in a nail-biting penalty shootout.

Future Eagles became the third team to qualify after they thrashed Zifa FC 2-0 in the quarter-final also before YMCA picked the last ticket.

The Walin Kakuri Ramadan Cup is an annual football competition which is in its fifth edition and it is aimed at fostering peace, friendship, and unity among the good people of Kakuri. The tournament is solely sponsored by the Walin Kakuri, Mallam Sani Abdullahi who has been using his money and energy to advance the course of Kanuri people for several years now through football.

The semi-final matches come up on May 8th and 9th this weekend with Zebra FC facing Future Eagles on Saturday while Kakuri United FC will slug it out for the revelation of the tournament, YMCA FC on Sunday in the second semi-final.

The competition is due to end on Thursday, May 13th, 2021 with the grand finale with mouthwatering prizes expected to be won by the two finalists.

Zebra FC vs Future Eagles ,May 8

Kakuri United vs YMCA FC, May 9