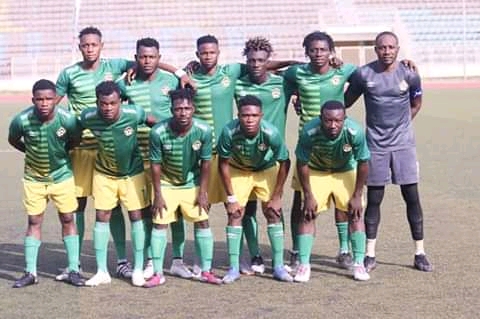 The much-awaited 2020-21 NPFL season commenced across six centres on Sunday with the remaining four games spread through Monday to Wednesday this week. It was the first time competitive games would be played in Nigeria since March 18th, 2020 when Coronavirus outbreak forced the country into a gridlock.

Www.dasportstainment247.com brings to you the review of the games played with the team of the week unarguably Kwara United even with four games yet to be played after they dazed Plateau United 2-0 in Jos. Here is our review of the six games played on Sunday that produced 12 goals.

Sai Masu Gida will rue their inability to secure maximum points at the Pantami Stadium, Gombe in a game they seemed to control from start to finish. Just like it was during their CAF Confederation Cup campaign which they exited in the preliminary round against ASC Jaraaf of Senegal, Kano Pillars drew against Jigawa Golden Stars due to their lack of cutting edge in the final third.

Ever reliable Rabiu Ali put Pillars in the vantage position as early as the 13th minute but they gave Jigawa Golden Stars the impetus to stage a comeback through Isah Garba in the 76th minute after they failed to kill off the tie with the several gilt-edge chances they spurned throughout the game.

Kano Pillars will head back home to prepare for the northwest derby with Katsina United at home while Adamawa United visit wounded Warri Wolves in Ozoro.

Nasarawa United began the season on a shaky note when they had to come back from a goal down at home to Wikki Tourists before negotiating a win at the Lafia Township Stadium on Sunday.

Promise Damala had the honour of scoring the first goal of the season when he struck in the fifth minute to hand the initiatives to the Giant Elephants but Reuben Nicodemus cleaned up the mess almost immediately with the equaliser in the seventh minute before he bagged the second goal in the 52nd minute. He became the first player to score a brace in a game this season.

Plateau United were by far the most outstanding team in the top flight when the season was interrupted in March due to the Covid-19 outbreak while Kwara United who were languishing in the relegation zone only had a second chance to remain in the NPFL because football stakeholders met and decided that there won’t be promotion nor demotion because of the prevalent condition that forced the 2019-20 season to be cut short after Matchday 25 on March 18th, 2020. But nine months down the line, a lot had changed between both teams. The Peace Boys were eliminated in the preliminary round of the prestigious CAF Champions League by Simba SC of Tanzania and have now lost their first home game of the season to the Harmony Boys.

It was a cagey affair for the most part of the encounter at the New Jos Stadium until Kwara United opened the floodgate of goals in the 62nd minute through ex-Sunshine Stars’ attacker, Jide Fatokun and they sealed up a memorable away win with the second goal five minutes later through Michael Ohanu who is staging a comeback to the team after a few years away playing for other Nigerian teams.

Can this be Kwara United’s year? It may be too early to ask but the Harmony Boys will have a chance to consolidate on the impressive win in Jos when they host Enyimba next in Ilorin. Plateau United’s Abdu Maikaba must regroup as quickly as possible if they do not want to lose a second game against Wikki Tourists in Bauchi.

Sunshine Stars paid handsomely for their inadequate preparation for the start of the season. Owena Whales players spent most of the pre-season activities clamouring for their unpaid salaries and it was even a magic that they raised a team that was able to withstand Jigawa Golden Stars for over 70 minutes before conceding a goal. Former Go Round and Yobe Desert Stars’ midfielder, Samuel Stone netted what turned out to be the match-winner in thirteen minutes from time to ensure that Jigawa Golden Stars started the season on a winning note despite playing their home matches at the Ahmadu Bello Stadium, Kaduna.

Dakkada will host Jigawa Golden Stars next in Uyo while Sunshine Stars will have another chance to placate their fans with a home fixture against FC IfeanyiUbah.

Before the game played at the Ifeanyi Ubah Stadium, Nnewi on Sunday, the Anambra Warriors have not recorded a win against Lobi Stars since they made their topflight debut during the 2016-17 season-spanning five matches. All that ended on Sunday when Nonso Nzediegwu notched the crucial goal in the 47th minute to send Kabiru Dogo led Pride of Benue back to Makurdi empty-handed.

FC IfeanyiUbah will travel to Akure next to slug it out with Gbenga Ogunbote led Sunshine Stars who are still at a loss after their defeat to Jigawa Golden Stars in Kaduna while Lobi Stars have a home duel with MFM.

The Olukoya Boys secured their first victory of the season against the Seasiders due to their impressive first half at the Agege Stadium, Lagos.

MFM began the game in a blistering fashion and were rewarded with two goals in the opening 25 minutes of the tie through Ebenezer Odeyemi and Muyiwa Balogun in the seventh and 23rd minutes respectively. Odeyemi, a former player of Enyimba and Niger Tornadoes, was a Striker of non-league side, Ottasolo FC during the pre-season before MFM handed him topflight lifeline again.

Werri Wolves stepped up almost immediately after their hosts’ second goal and they halved the deficit in the 27th minute through Johnpaul Chinedu. Poor marksmanship denied them the chance to at least grab a draw in Lagos.

Warri Wolves will host Adamawa United with their sights on picking first win of the season while MFM have a tougher assignment against Lobi Stars in Makurdi.