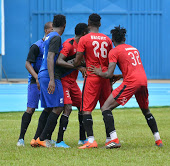 The Nigeria Professional Football League will hit matchday five this weekend and www.dasportstainment247.com has run the rule on some key fixtures that will be played and what it means for the future of the coaches handling those teams

It is now or never for Akwa United to secure their first win of the season or to make drastic changes in order to salvage their season. They have played four games in the topflight with only three points to show for their efforts. They have failed to beat lightweights like Abia Warriors and Katsina United at their fortress Godswill Akpabio Stadium, Uyo. Sadly but true they are also yet to score at home after two games.

The Promise Keepers handler, John Obuh is claiming he is not under pressure and he has clamoured for the patience of their fans and supporters. It is yet to be seen if the club management will be patient and be willing to give the former Flying Eagles boss the necessary assurances he asked for if they fail to grab the maximum points against Nasarawa United on Sunday.

Akwa United invested in new players and have also set the target of finishing the season with a continental slot at hand but the current trend won’t yield anything of the sort except they turn their season around immediately.

Nasarawa United have lost three of the four games they have played. They are presently at the bottom of the league table. It is the worst time to visit Uyo because of the pressure associated with this their latest game with Akwa United. Can they buckle under pressure the way they had in the three games they lost?

Sai Masu Gida head coach, Ibrahim Musa was given a three match ultimatum and he began the threat with a loss to Jigawa Golden Stars in Kano. It was game everyone expected Kano Pillars to win because Jigawa Golden Stars are making use of the Sani Abacha Stadium, Kano for their home games.

Pillars will face highflying Wikki Tourist in Kano on Sunday. They have played two matches at home this season and they didn’t secure a win out of the two. Knowing how restive Kano fans are it is avid to note that the League Management Company directive that their home games be played behind closed doors because of the incident in Lagos during the NPFL Championship Playoffs is having negative effect on Pillars.

Wikki on their part are having a good season with three wins from four matches including the famous 1-0 win against Nasarawa United in Lafia. They are third on the league table with nine points and could displace Lobi Stars and Plateau United at the top if they are able to scoop the three points in Kano.

The Anambra Warriors were second best against Akwa Starlets in Uyo on Thursday in the NPFL Matchday Four tie and they deservedly lost 1-0 to the premier league newcomers. They are up against Lobi Stars on Sunday and will be eager to grab their third win of the season after less than stellar victories over Adamawa United and Rivers United.

Ifeanyi Okagbue’s men are sixth in the league table with seven points from four games and they will need the maximum points to shoot up the ladder of the league log.

Lobi Stars bounced back from their humiliating 3-1 defeat to Plateau United with three successive wins over Delta Force, Kano Pillars and Heartland and they will fancy their chances against newlook Anambra Warriors in Nnewi.

The pride of Benue are second with nine points from four matches and they must notch an impressive result in Nnewi if they do  not want to move down the league table.

Rivers United dusted off their loss to FC IfeanyiUbah with a 2-1 home win over Enugu Rangers who are presently in crisis after second successive loss in as many games. The Pride of Rivers are up against Warri Wolves are yet to be beaten after four games.

The Seasiders have been very formidable at home. They were held by Akwa United in their return game to the topflight but whipped Adamawa United 2-0 in their next home tie. They have picked important points in Akure against Sunshine Stars and in Lagos against MFM.

For Stanley Eguma led Rivers United to deny their host the maximum points, they must be as good as possible and try to match Warri Wolves in all the departments of the game.