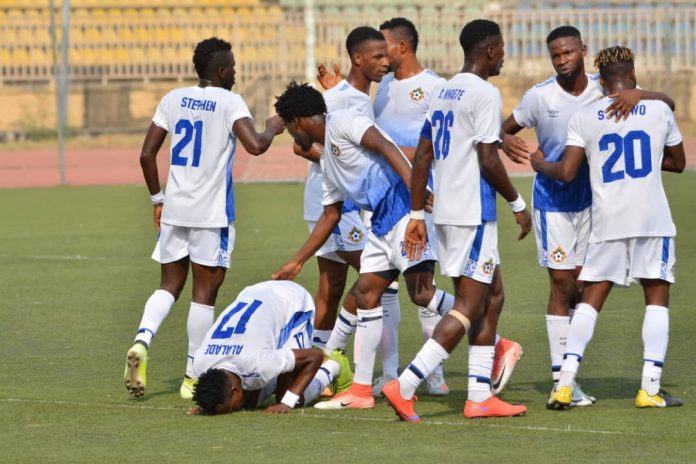 Kwara United, Nasarawa United, Kano Pillars, and Katsina United got morale-boosting home wins to consolidate on their league position on the table after the NPFL marked its Matchday One 10 on Sunday, and here are the reviews of the games as brought to you by www.dasportstainment247.com.

With two games shifted: Warri Wolves vs Enyimba and Plateau United vs Rivers United until a later date because of Enyimba and Rivers United’s CAF Confederation Cup confrontations on Sunday in Aba and additional two matches: Heartland vs Lobi Stars and Abia Warriors vs Enugu Rangers delayed until Monday afternoon because of Television coverage convenience, only six games were played on Sunday.

Here are their summaries of the games played on Sunday as brought to you by www.dasportststainment247.com:

At the Kwara State Sports Complex, Ilorin, Kwara United thrashed Dakkada 3-0 through the goals of Wasiu Alalade, Michael Ohanu and Alao Danbani in the 13th, 72nd and 80th minutes to leap to the top of the NPFL for the second time this season. They have 21 points from 10 games but have played a game more than Enyimba, Rivers United and a few others that are their other title challengers.

At the Lafia Township Stadium, Nasarawa United needed a last minute goal to return to winning ways at the expense of Akwa United. Before the tie, the Solid Miners had lost three consecutive games to Plateau United, Enyimba and Rivers United but they managed to get the job done at their fortress on Sunday.

The game was goalless at halftime but Adamu Hassan got the hosts opening goal in the 56th minute. The Promise Keepers responded with the equaliser seven minutes later through Ndifreke Effiong for his seventh g oal oftheir e campaign. When Akwa United thought they had had a share of the spoils Nasarawa United struck through Ebuka Anaekwe in the third minute of the additional time. The Solid Miners moved to the sixth position with 17 points from 10 games while Akwa United slid to seventh with 15 points.

At the Muhammadu Dikko Stadium, Katsina, Katsina United relied on Samuel Kalu’s 40th minute strike to beat Jigawa Golden Stars. The Changi Boys are now in the 13th spot with 13 points while Jigawa Stars are in the 12th position with 13 points.

At the Tafawa Balewa Stadium, Bauchi, Wikki Tourists could not consolidate on their impressive point at Makurdi versus Lobi Stars the penultimate weekend and were held to a goalless draw by equally wounded Sunshine Stars. The draw takes the Giant Elephants’ points haul to 13 and are 11th from 10 matches. Sunshine moved to the eighth spot with 14 points from as many games.

At the Pantami Stadium, Gombe, Adamawa United were unable to secure their first win of the campaign despite leading FC IfeanyiUbah for the most part of the game through Idris Abubakar’s 21st minute but they were unable to protect their lead. An infringement in the 79th minute in the hosts vital area gave the Anambra Warriors the chance they needed to grab the equalising goal. Christian Molokwu sent goalkeeper, Ikechukwu Obilor the wrong way with the leveller 11 minutes from time.

At the Ahmadu Bello Stadium, Kaduna, Kano Pillars continued their fine form with a routine home win against MFM. Sai Masu Gida didn’t have it easy but they managed to secure the points through last gasp goal of Umar Hassan in the fifth minute of additional time. The victory takes Pillars to the third on the table with 20 points from 10 games but the Olukoya Boys are in the 15th spot with 10 points from the same number of games.