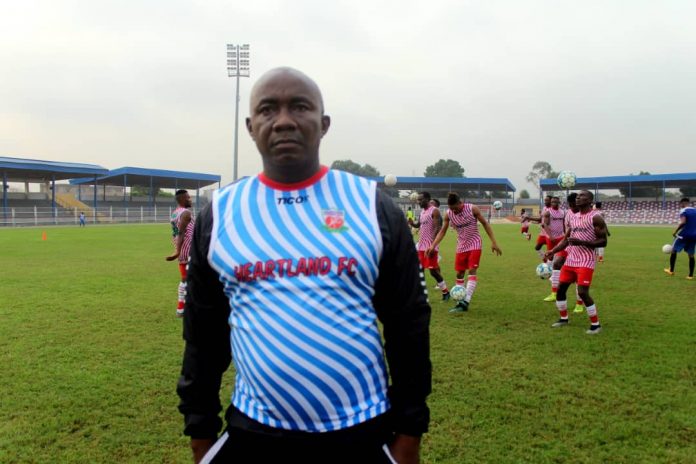 Heartland FC Assistant Coach, Charles Uzor is optimistic the Scientific Boys will earn their first away points of the season this weekend when they slug it out with Jigawa Golden Stars in Matchday Seven of the Nigeria Professional Football League in Kaduna.

Uzor who was formerly Heartland’s feeder team coach hinged his optimism on the club’s level of preparations for the tie and on some factors which could tilt the result in their favour at the end of the game billed for the Ahmadu Bello Stadium, Kaduna.

The Assistant Coach expressed that Heartland could benefit from the touch-line ban given to the head coach of Jigawa Golden Stars, Gilbert Opana, and the fact that the game holds on neutral ground to both teams.

“Everyone is seeing how the season has been progressing and all teams are eager to win their home games and also do well in away matches too,” Uzor began in a chat with the club’s media made available to www.dasportstainment247.com.

“For us Heartland FC with the level of our preparations for the weekend I can say confidently that we are going to Kaduna for the three maximum points. We are yet to pick any point away from home and it is the reason we are working so hard to ensure we end that this weekend.

“I believe they are presently unstable and unbalanced with their technical head barred from taking part in the game. That is going to play a very big role against them and also a game they are playing away from their natural home.

“It is a neutral ground and by the grace of God all things being equal I strongly believe we are going back home with three points or in a worst-case scenario we must go home with at least a point on Sunday.”

Heartland go into the tie with two wins and four losses and are 17th on the table with six points from six games.