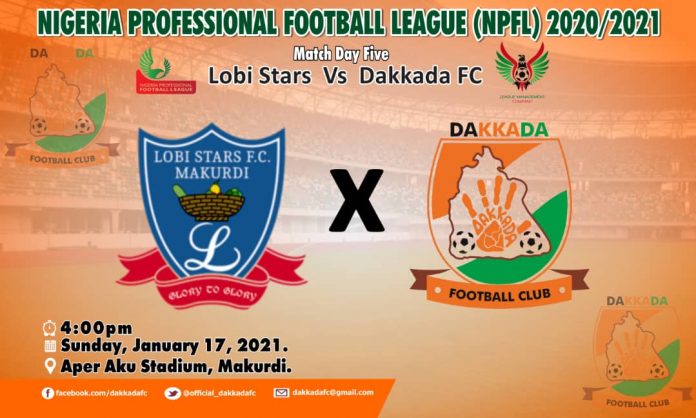 With a total of 74 goals already scored – 23 of which have been contributed by away teams – 6 away wins, 25 home wins and 8 draws recorded so far in 39 matches, the NPFL is showing no sign of abating in the excitement, surprises and unbridled action it puts forward every Match Day.

This weekend’s menu contains a delicious fixture from the south bank of the Benue River, Makurdi, where Lobi will be hoping that their Stars would shine against an unbeaten south-south outfit, Dakkada FC.

Dakkada and Lobi had their respective two-match winning streaks brought to an end on Match Day Four after being involved in exciting scored draws last Wednesday.

Dakkada were left rather crestfallen after a late strike by Adebayo Temim earned MFM an equal share of the spoils in Uyo and prevented the hosts from assuming leadership of the standings for the first time in the club’s history.

Lobi Stars would feel hard done by having also failed to cart home the maximum spoils from Akure. Sadeeq Yusuf reacted quickest to tap in an equalizer for Sunshine Stars from close range following a rebound in the second minute of stoppage time at the end of the ninety much to the disgruntlement of the away side who were seeking a repeat of their 2017 feat.

This fixture is not only on a knife-edge but it also has an extra spice to it as both sides will be seeking a positive reaction to their midweek predicaments.

Leading scorer, with two goals, Solomon Chigozie has hardly put a foot wrong in a Dakkada shirt this term. On Wednesday, the slick midfielder scored what is undoubtedly an early contended for the goal-of-the-season award when he controlled a low cross with his left foot into his strides and swirled his body around it before finishing off with his right foot on the turn and on the half volley just outside the box with MFM goalkeeper, Bamidele Adeniyi, deeply rooted to the ground while admiring the trajectory of the shot all the way in.

Martins Ossy has easily been Lobi’s go-to guy this campaign. The former Rivers United forward has bagged three of Lobi’s six NPFL goals so far while Samuel Mathias, with two goals to his name, and Chinonso Okonkwo, who has a solitary goal under his belt, have been dark horses.

Lobi Stars will find the present crop of Dakkada players a different proposition to last season. They will have to contend with the intelligence and pass accuracy of Aniekan Ekpe, who has been the orchestrator-in-chief for Dakkada, the faultlessness of Olawale Doyeni and the speed, guile and agility of Ubong Williams all through what is expected to be a torrent of non-stop attacking football from the visitors.

After ninety exciting minutes of pulsating football but one which was devoid of goals, nothing could separate Lobi and Dakkada when they last met in Makurdi on January 19, 2020.

If selected, Arinze Obuka and Isaac George will be the only surviving Dakkada players who started the Makurdi meeting last year.

Having switched allegiance in opposite directions at the end of last season, Dakkada old boys, Spencer Bassey and Osimaga Duke, both of whom started for Dakkada on that fateful day are expected to start for Lobi, tomorrow. The duo has been a recurring decimal for Lobi Stars this term. It would make for fascinating viewing just how welcoming they will be to their former colleagues on strange grounds.

Kick-off in Makurdi is at four o’clock in the afternoon while live text updates and video highlights will be available on all social media handles of Dakkada FC.