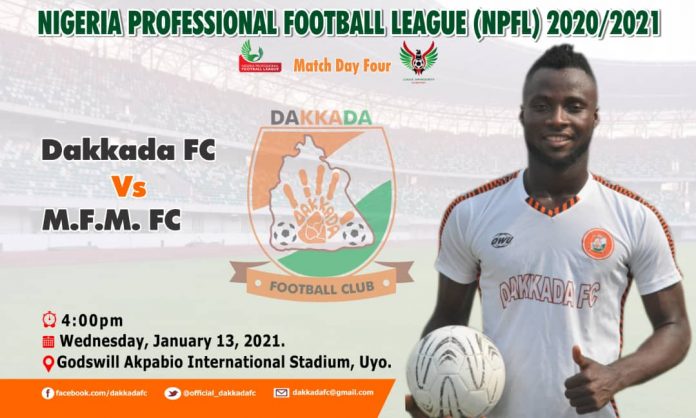 The first midweek instalment of this season’s NPFL action beckons on Wednesday across various centres in the country.

At the behest of both Akwa United and Dakkada, football fans in Uyo belong to the fortunate category who get to savour league action at the awe-inspiring Godswill Akpabio International Stadium every Matchday as Dakkada will be playing hosts to MFM FC.

Dakkada will be seeking an instant riposte after their six-match unbeaten away run was brought to a halt by MFM last season in what was also a midweek NPFL fixture in January.

Undoubtedly, striker Nnamdi Mejuobi who scored the game’s solitary goal for MFM with an overhead kick on his home debut before switching allegiance in opposite directions at the end of last season will be the centrepiece of the duel. Like it was in Lagos, if selected, Nnamdi who capped his first cap with a goal in Nnewi on Sunday will be making his home debut for Dakkada exactly one year and five days after he debuted for MFM.

It is worthy of note that Dakkada’s vastly-experienced Chief Coach, Mr. Lawrence Kingsley, has demonstrated enormous belief in his players by making use of the full depth of his squad and appears to possess the wherewithal to cause them to put in an extra shift for the team. The players-friendly coach, who has had eight players consistently featured in all his start lists so far, made just two changes to his starting eleven at Nnewi and the changes paid off big time.

His opposite number at MFM, Tony Bulus, has been par for the course with his selections.

The former Head Coach of Malumfashi United who was also part of the Rangers technical crew set-up in 2016 has made use of only 16 (sixteen) players in his start lists since the commencement of this season with the sextet of Adeyinka Bamidele, Barry Legbara, Odeyemi Ebenezer, Dennis Obasi, Akani Elijah and Moses Adukwu featuring from the start in all three outings so far.

On Sunday, he made just one change to his starting line-up by giving a debut appearance to Ebenezer Odeyemi in place of William Obata in central defense and that move earned his side a first clean slate of the campaign.

Separated by one point and four places in the standings, Dakkada and MFM appear to have some scores to settle but any unresolved issues between these sides will be properly adjudicated, tomorrow, at the Nest of Champions.

Kick-off in Uyo is at four o’clock in the afternoon while live text updates and video highlights will be available on all social media handles of Dakkada FC.

NEXT FIVE FIXTURES
Lobi Stars Vs Dakkada
MFM Vs Rangers