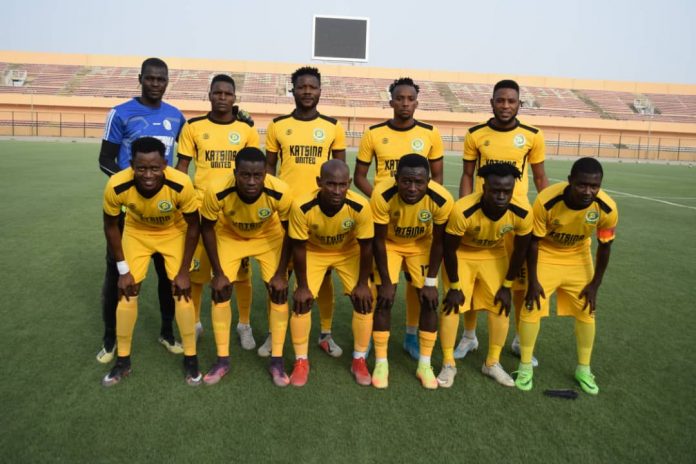 Katsina United put up a masterclass performance befitting of Champions at the Muhammadu Dikko Stadium, Katsina to comeback from the jaw of defeat twice and still emerged victorious against Heartland in a Nigeria Professional Football League 2020-21 Matchday One tie played on Monday.

The Naze Millionaires started the game in Katsina in blistering fashion with former Rivers United and FC IfeanyiUbah, Bright Onyedikachi scoring the curtain-raiser as early as the second minute to become the fastest goal of the season thus far.

Katsina United swung into action almost immediately after Heartland’s opener but they were unable to get the equaliser with the Naze Millionaires defence in top shape and repelling all that their host threw at them.

The Chanji Boys managed to level proceedings in the 44th minute through Senegalese Boubacar Masally who nicked the ball to the back of the net after getting the better of Ikechukwu Ezenwa.

The second-half began on a rather slow note with Katsina United seeking to score the second goal while Heattland were only comfortable with keeping possession but the contest burst to life in the final 10 minutes with the Owerri side taking the lead for the second time in the game through Samuel Nnoshiri in the 81st minute.

The home team still didn’t concede defeat even with barely 10 minutes to the end of the contest and they found the Senegalese in inspirational form when they were bereft of it. He got the equaliser again for the second time in the game to make 2-2 in the 88th minute.

Having succeeded in coming back twice in the game, the Chanji Boys sensed they could get the three points and they came all out in search of it like marauding beasts. They got their wish in the injury moment of the game when Samuel Kalu who debuted for the hosts in the game smashed home the winning goal at the death.

Katsina United will hit Kano this weekend for a league encounter with Kano Pillars while Hearttland will host Nasarawa United at the Dan Anyiam Stadium, Owerri.

In the second game played at the Godswill Akpabio Stadium, Uyo, Akwa United and Dakkada plated an entertaining goaliess draw in a game that witnessed the return of Mfon Udoh to the club.

It was a game that was action packed in the first half but the tempo dropped in the second half with both teams contented with a share of the spoils in the season’s opener.

Akwa United have tough tie with Rangers to negotiate on Sunday while Dakkada FC will be at home to Jigawa Golden Stars this weekend too.