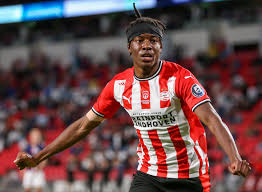 In the GERMAN BUNDESLIGA, Kingsley Ehizibue returned to FC Cologne squad after sitting on the bench for their previous two games with Freiburg and RB Leipzig and featured for 78 minutes as the Goats were held to a goalless dead at home by Hertha Berlin. FC Cologne are still in search of their first win of the year.

Kevin Akpoguma was absent again for Hoffenheim who limped to a goalless draw at home to less fancied Arminia Bielefeld while a certain Felix Agu was on the score sheet for Werder Bremen who spanked Augsburg with Felix Uduokhai and Noah Sarenren- Bazee in action.

In the DUTCH EREDEVISIE, Super Eagles Goalkeeper, Maduka Okoye failed to add to his four clean sheets of the season for Sparta Rotterdam in their home game with former Dutch League champions, PSV Eindhoven which they lost 5-3. Okoye saw action for 90 minutes but he was unable to prevent England youth International, Noni Madueke from scoring his team’s third goal in the drubbing.

In the PORTUGUESE TOPFLIGHT, Chidozie Awaziem received his third professional red card as Boavista who ended the game with nine men collapsed to a 3-1 defeat at Tondela. The Nigerian was sent packing in the 30th minute of the encounter in his 13th game of the season for his on loan team.

BELGIAN LEAGUE highest goals scorer, Paul Onuachu fired blank for Genk in their 2-0 away loss to Royal Excel Mouscron. Onuachu with 19 goals from 20 games had before the tie notched five goals from the previous three games but he was unable to extend his scoring streak to four consecutive games. His compatriot at Genk Cyriel Dessers replaced him in the 78th minute but he
didn’t stay much enough to affect any change.

Genk suffered a setback in their quest to wrestle the league title from Club Brugge who could extend the lead at the top with a positive outcome in their Sunday game. They are still second with 38 points from 21 games.

In the TURKISH SUPER LIG, it was touted to be a tie between Azubuike Okechukwu and Olanrewaju Kayode when league reigning champions, Istanbul Basaksehir traded tackles with Sivasspor but neither featured for their clubs despite being on the bench as both teams settled for a 1-1 draw while Anthony Nwakaeme was available for Trabzonspor for 90 minutes as they secured a 1-1 draw at Antalyaspor.