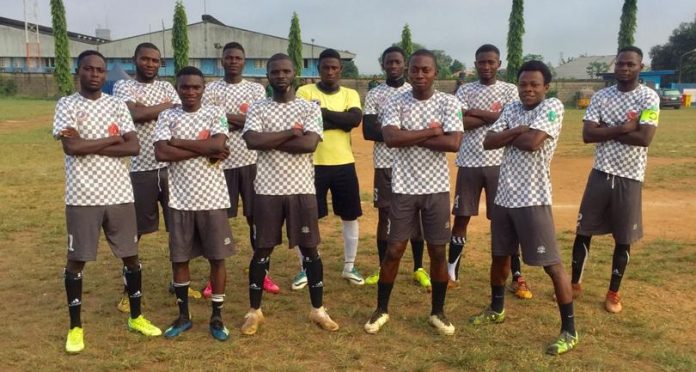 Nationwide League One Division One side Magate Football club continued preparation ahead of the NLO 2020/2021 season with a 4-3 victory over Big Daddy Academy in their second tune up game played Wednesday at the club’s training ground, Supreme Distilleries Field Iju Ota, Ogun State.

Big Daddy Academy were the brightest of the two sides in the opening 15 minutes of the encounter going 2-0 up after nine minutes, forcing Coach Umar Farouq into an early defensive substitution for Magate FC.

After going 2-0 up Big Daddy Academy took their foot of the pedal as the NLO side stepped up the tempo with Adebayo Rasaq reducing the deficit in the 35th minutes as he headed home from close range.

Big Daddy Academy regained their two goal cushion just after Magate had pulled one back following a defensive howler, but Magate reduced the goal tally through John Daniel who coverted from the spot to make it 3-2 just before the break, after captain Akinboboye Abiola was fouled just inside the opponent box.

Magate began the second half a more improved side, as Adebayo Rasaq completed his brace as he headed home from Francis cross off the conner kick to restore parity. The home team came close to taking the lead minutes after as Akinboboye Abiola’s strike hit the woodwork after dazzling past three defenders before unleashing a sublime strike just at the edge of the box only for the woodwork to denied him on that occasion.

Akinboboye Abiola finally got his goal late into the game as he headed in a deflected cross from Shauib Ibrahim to give Magate the lead in what proved to be the winner, 4-3 it ended.

It is the first Victory for the NLO side after the post covid19 break having played a 1-1 draw against Ileogbo United few days ago.