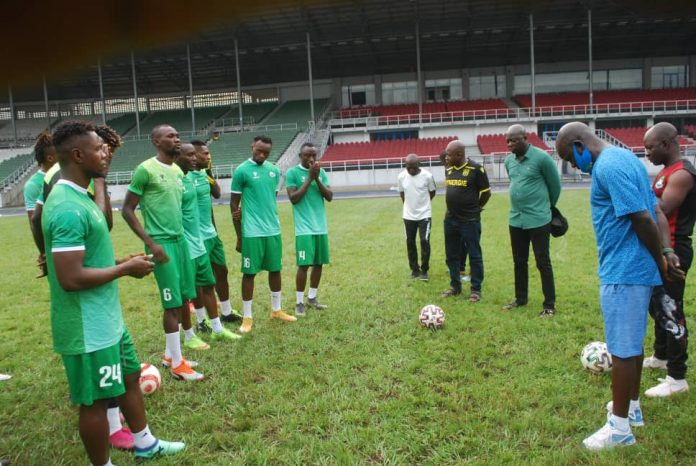 Nasarawa United’s gaffer, Bala Nikyu, has stated that his wards will go all out against the Pride of Rivers like a wounded lion when both sides clash at the 45,000 Capacity Adokiye Amasieamaka stadium, located at Igwuruta, Ikwerre, Rivers State, on Monday afternoon.

The coach disclosed this to NUFC Media prior to the Solid Miners’ light workout at the facility on Sunday evening.

According to him, “Mistakes are inevitable in football, but it’s equally good for somebody to strive to rise after falling.

“We are not under pressure, but we are like wounded lions rearing to take back our pride.

“We fell twice in the last two weeks. I want to believe that this won’t continue like this. We have to gear up and get going.

“If we scruple in tomorrow’s game, our position on the table will be heart-breaking, and this could put us under intense pressure.

“We will give all we have to come out the better side.”

Bala Nikyu who has so far guided the Lafia-based side to two away wins this season added that he and his team had resolved to make a mark in the 2020/2021 League Season.

“Our target is to ensure that we are among the top three teams, if not the first, this season.”

Relatedly, Club Chairman, Barr. Isaac Danladi, who came to watch the team’s training session, emphasized that it was time for the team to leave behind the dismal results of the past and forge ahead.

Joined by the Team Manager, Solomon Babanjah, the Club’s boss revealed that after the loss to Enyimba in Lafia, he had a one-on-one discussion with the players who assured him of decent results in subsequent games.

“After our loss at home, I had a meeting with you, and you all assured me that things will change for the better.

“This is not the time to apportion blames to anyone.

“We are playing away, put the home team under pressure. Be very calm in front of goal, but be purposeful from behind to the middle and to the attack.

“We respect our opponents, and so also they do for us. But you don’t respect your opponent at your own peril”, he remarked.

Nasarawa United are placed 7th on the log with fourteen points while their hosts, Rivers United are 4th with fifteen points.

The NPFL matchday nine fixture between Rivers United versus Nasarawa United comes up by 4pm on Monday, 8th February, 2021, and will be televised live on the Nigeria Television Authority, NTA, and the league’s official broadcast channel, NPFL.tv.