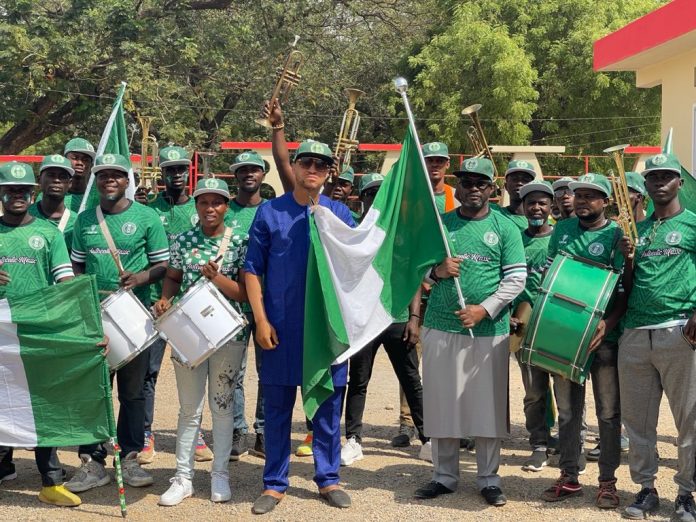 Members of the Authentic Nigeria Football and Allied Sports Supporters Club have been commended for giving the Super Eagles maximum support to get two victories so far at the ongoing Africa Cup of Nations in Cameroon.

Nigeria’s Ambassador to Cameroon, Abayomi Olorunisakin who made this disclosure when the Supporters Club visited him at his office in Garoua appreciated their unwavering support and sacrifices for the Super Eagles and he challenged the body to continue to back the team until they win the 33rd edition of Africa’s flagship competition in Cameroon.

“I want to congratulate all of you for all you have done. I want to sincerely thank and on behalf of the President, Muhammadu Buhari to appreciate you for all your sacrifices because there have been so many sacrifices that you have made to be here to cheer the Super Eagles,” Dr. Olorunisakin told the ANFASSC.

The Ambassador who recalled the impact of the support accorded the Super Eagles in the build-up to the team’s qualification to the final round of the 2022 World Cup including in the game with the Central Africa Republic in Douala by the supporters club tasked them to keep up the good work in Cameroon in all the Eagles remaining games.

“I remember I met with your leader in Douala during the game with the Central African Republic. We are grateful now that you are here and you can support the Super Eagles. I want to thank, commend and appreciate you for all that you have done and you are doing and still going to do.

“We pray we win all our first-round games and excel in the Round of 16 and quarterfinal games. After those games then we will proceed to the semi-final in Douala and then get to the final in Yaounde where we are gunning for the cup.

“It is our desire and prayer and I believe your support will be necessary to see us through these games,” he concluded.

While speaking earlier during the visit, the President of the Authentic Nigeria Football and Allied Sports Supporters Club, Abayomi Ogunjimi thanked the Nigerian Ambassador to Cameroon for the warm welcome accorded to them during their visit and he promised that the Super Eagles will have unbridled support in all their remaining games even better than they did in the previous two games.

We have done it against Egypt and Sudan and we are going to repeat the feat against Equatorial Guinea also. We are going to give the Eagles maximum support,” Ogunjimi said.