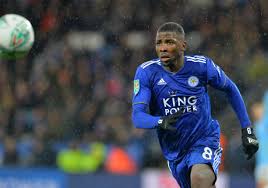 Fulham made a giant step towards ENGLISH PREMIER LEAGUE retention at the end of the season with a 1-0 win at Anfield against Liverpool.

The Cottagers with Ola Aina and Josh Maja expecting to earn their 25th and eighth games of the season will host Manchester City in another tough fixture today. Other Nigerian interests at the club who could make the fixture more fascinating include Tosin Adarabioyo and Ademola Lookman who have appeared 24 and 25 times respectively. The latter has scored four goals to help boost Fulham’s chances of EPL survival.

At Selhurst Park, Crystal Palace will host West Bromwich Albion today with Semi Ajayi a doubt to feature after Baggies manager, Sam Allardyce overlooked the Nigerian in the club’s last two games against Newcastle United and Everton. Will Ajayi add to the 24 league games he has played so far this season?

The Super Eagles’ forward played 56 minutes in their 2-0 loss to Chelsea at the Stamford Bridge for his 24th game of the season last weekend. He has scored only a goal this season.

The Super Eagles hit-man netted in his last two matches against Burnley and Brighton & Hove and he is favoured to record his fourth goal against the Blades. His compatriot, Wilfred Ndidi is expected to play against Sheffield United too having featured prominently since his return from injury. Ndidi has played 16 games in the league alone with a goal to show for his efforts.

Super Eagles striker to the 2018 FIFA World Cup, Simeon Nwankwo, is still hogging the headlines in the ITALIAN SERIE A though Crotone are condemned to return to the lower league at the end of the season. Simy hit double figures last weekend in the Rossoblu’s 4-2 victory over Torino. It was his 10th goal of the season from 26 appearances and three in his last two games. Crotone travelled to Stadio Olimpico as a guest of Lazio yesterday.

Elsewhere, Victor Osimhen returned with a bang for Partenopei last weekend against Bologna after three weeks of inactivity. He is favoured to return to the first 11 when Napoli travels to the San Siro to face second-placed AC Milan tomorrow. He has three goals from 11 games for Napoli.

Sadly, Awoniyi is yet to recover from his thigh muscle ruptured injury and will miss out.

Arokodare is another major doubt having not featured in coach Markus Grisdol’s plans since February 14th. Ehizibue has been relegated to the bench while Dennis who joined the Billy Goats from Club Brugge in February this year is still adapting to his new environment. He was introduced in the 71st minute of FC Cologne’s 1-1 draw at home to Werder Bremen last weekend.

Kevin Akpoguma is yet to regain match fitness and will still sit out Hoffenheim’s league tie at VfB Stuttgart tomorrow. The Super Eagles defender has not played since January and this denied him a place in Nigeria’s squad for the 2021 AFCON qualifiers against Benin Republic and Lesotho Later in the month. Akpoguma has been regular for both Hoffenheim and Super Eagles before the injury woes.

Culled from The Nation Newspapers.