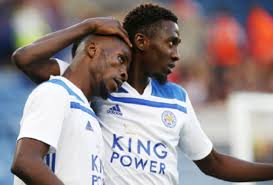 Games are coming thick, fast and blockbuster for Nigerian players in top European Leagues with tantalising fixtures to negotiate for their teams this weekend writes www.dasportstainment247.com:

At the Turf Moor, West Brom’s Semi Ajayi received his first ENGLISH PREMIER LEAGUE red card last weekend when the Baggies battled to a goalless draw at Burnley. He was sent off in the 30th minute of the game for deliberately handling the ball to deny the Clarets goals scoring opportunity. He will miss West Brom home games with Brighton today and Everton next week. He has been super regular before the latest setback.

Ademola lookman was the hero for Fulham as they pipped Sheffield United 1-0 last weekend. Lookman,Ola Aina, Josh Maja and Tosin Adarabioyo all played their parts in the game for the Cottagers. Fulham visit Crystal Palace at Selhurst Park tomorrow and they have another chance to continue their fight towards escaping the relegation zone.

At the King Power Stadium, Leicester City will slug it out with Arsenal tomorrow with the Nigerian duo of Wilfred Ndidi and Kelechi Iheanacho expected to play starring roles. Ndidi was on for the entire duration of their game with Aston Villa last weekend but Iheanacho was only an unused substitute. He should figure in this game after their Europa League loss to Slavia Prague on Thursday.

The Foxes are in the third position only on inferior goals difference to second-placed Manchester United but they are both on 49 points. Leicester can leapfrog the Red Devils who face Chelsea at the Stamford Bridge also tomorrow, if they beat the Gunners and Man.U fails to secure three points against the Blues.

At the Merseyside, Alex Iwobi’s Everton who are still smarting from their 2-0 away win over Liverpool at Anfield Stadium last weekend will trade tackles with Southampton at Goodison Park on Monday. Iwobi replaced Richarlison in the 86th minute of the tie with the Reds but he should start this one.

At the Stade Matmut Atlantique, Bordeaux who are placed 11th with 33 points will hope their attacking winger, Samuel Kalu is in his right element as they welcome Metz today. Kalu and his teammates watched in awe as Nimes decimated them 2-0 last weekend. Kalu who was yellow-carded in the encounter was available for 61 minutes before he was substituted.

Ahead of another duel at Stade du Moustoir, Lorient and Terem Moffi have lost their footing slightly after their six-match unbeaten streak was rudely ended by Lille who smashed them 4-1 at their fortress last weekend. They were beaten again by Nimes in a rescheduled game played midweek to further compound their woes. The two consecutive defeats have seen them slide back into the relegation zone as they are placed 19th with 23 points from 26 matches. Moffi with eight goals from 20 league appearances and his teammates must help stop the rot as Lorient host Saint Etienne in another blockbuster tie tomorrow.

Stade des Costieres in Nimes is the place to be as the home team, Nimes will strive to make it a hat-trick of defeats to French clubs with at least a Nigerian in their team. Nimes thrashed Bordeaux 2-0 complete with Samuel Kalu and they pipped Lorient who had Terem Moffi on for 66 minutes, 1-0 through Renaud Ripart’s 88th-minute penalty kick. The same team is billed to face inconsistent Nantes with Moses Simon tomorrow. Simon was available for 61 minutes in their 1-1 draw with Marseille and he is among the players that will be relied on to help salvage Nantes’ troubled
season.

In the GERMAN BUNDESLIGA, Emmanuel Dennis, Kingsley Ehizibue and Toluwase Arokodare will have their hands full with FC Cologne who travel to the slaughter slab called the Allianz Arena in Munich for a tough game with reigning Champions, Bayern Munich today. The acquisition of Dennis on loan from Club Brugge brought two quick fire victories against Borussia Monchengladbach and Arminia Bielefeld but they have lost the last two fixtures to Eintracht Frankfurt and Stuttgart respectively. Bayern have stuttered in their last two games against Arminia Bielefeld and Eintracht Frankfurt from which they only earned a point. Can the Nigerian trio help the Billy Goats to a famous win?

Union Berlin is expected to play without injured Awoniyi tomorrow when they face Hoffenheim who also have another Nigerian, Kevin Akpoguma unavailable owing to injury. Union Berlin returned to winning ways last weekend after a five-match winless streak to beat Freiburg by a lone goal while Hoffenheim who exited the Europa League on Thursday to Molde FK, whitewashed Werder Bremen 4-0 last weekend.

In the ITALIAN SERIE A, Simy Nwankwo and Crotone will go in the hunt for maximum points when they host relegation rivals, Cagliari tomorrow. The Rossoblu met more than their match last weekend when they were thrashed 3-0 by Cristiano Ronaldo-inspired Juventus. Simy who has been super regular for most of the matches was surprisingly dropped to the bench for the game. He came on in the final 18 minutes but he couldn’t add to his seven league goals from 23 games.

Napoli will host lightweight, Benevento tomorrow with Victor Osimhem, not in the squad. He collapsed in the dying minutes of their 4-2 loss to Atalanta after an aerial tussle last weekend. He was rushed to the hospital and had to sleep over in Bergamo before he returned to Naples on Monday. He missed the Partenopei’s Europa League Round of 32 return leg tie on Thursday due to the same issue.