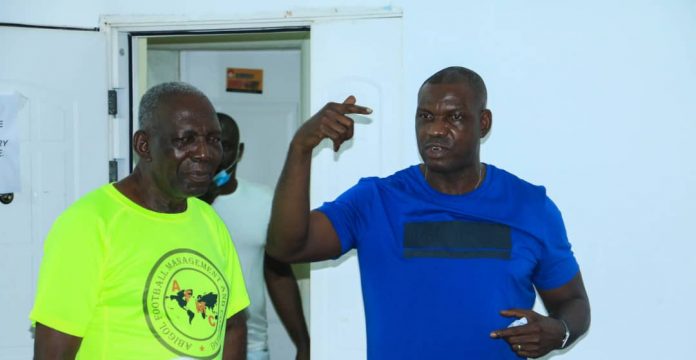 Asaba in Delta State is the next station for the moving train of the ongoing Berackiah/Abigol Coaching Clinic as coaches across the eleven states of the South East and South South parts of Nigeria converged to feed their inquisitiveness from the 5-day event.

Speaking at the opening ceremony of the clinic which held at the Delta State FA Secretariat in Asaba on Monday, the Technical Director of the Nigeria Football Federation, NFF, Augustine Eguavoen commended the organizers of the clinic for the project which he said would help get the extra best of the coaches.

Stressing the significance of coaches to football development, the former Enyimba FC gaffer believed the project will bring the best out of Nigeria coaches considering the calibre of the resource persons giving the fact that the future of the game lies with them.

Eguavoen, who has one time coached Super Eagles further assured participants that the NFF will work assidously to create more job opportunities for “majority of the coaches” in the pressing need to achieve sustainability of football growth in the country.

In his remarks,Azuka Chiemeka who represented the Chairman of Delta FA said the state recognizes the importance of continuous training of coaches, thus its decision to play host to the programme where the capacity of its coaches can be brought in tune with the latest trend of dugout business.

Mathew Olorunleke, the co-facilitator of the clinic pointed out that the clinic was aimed at balancing the strength, energy and passion of Nigerian coaches with necessary education.

One of the Italian resource persons, Marco Gian who will be taken the coaches through the fundamentals and rudiments of goalkeeping said they are not in the country to teach the coaches but to share their knowledge in order to create a win-win situation that will see to the growth of football in Africa.

“At the end of this workshop, we will have passed the ball to you all (coaches) and it will be your duty to fulfil our dreams,” Marco quipped.

The coaches after the opening ceremony were able to receive the first session of the clinic (The Game) as taken by High Chief Adegboye Onigbinde, the former Super Eagles Coach and a retired FIFA/CAF instructor.

‘Baba’ as he is fondly called walked the participants through the history of the most followed sport in the world while expressing optimism that the coaches will bear a positive impact on football in the country while restoring the old glory.

The programme continues on Tuesday with another round of sessions which aims to bequeath the coaches with the dynamics of the game.

Recall that the South West zone of the clinic was rounded off in Ijebu-Ode on Friday 29th of January as 116 coaches got their certificate of participation.

The train of the programme will hit Lafia in Nasarawa State for the North Central and North East zone from 8th-12th February.