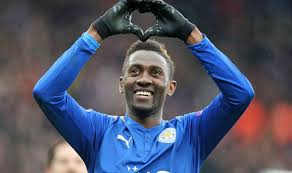 Super Eagles midfielder, Wilfred Ndidi bagged his first goal of the season for Leicester City in their 2-0 home win over Chelsea which sent the Foxes to the top of the EPL www.dasportstainment247.com can report.

Ndidi struck in the sixth minute and was on for 90 minutes as Leicester moved to the top ahead of Manchester United with 38 points from 19 games but have played a game more with the Red Devils due to face Fulham on Wednesday night at the Craven Cottage. Ndidi’s compatriot, Kelechi Iheanacho had two minutes cameo appearance as a late replacement for Jamie Vardy in his 10th league game of the season with eight of those as substitutes.

Semi Ajayi couldn’t make it three goals in three games as West Brom suffered a 2-1 loss to West Ham at the London Stadium on Tuesday night in the Nigerian 18th league game of the season. The defeat still kept the Baggies in the relegation zone.

In the ENGLISH CHAMPIONSHIP, Arnaut Danjuma, Dominic Solanke, and Nnamdi Ofoborh were on the losing side with AFC Bournemouth who fell 1-0 to Derby County. Danjuma was on for 63 minutes while Solanke lasted the entire duration of the game but ex-Flying Eagles’ Ofoborh was an unused substitute in the report filed by www.dasportstainment247.com.

It was the Cherries’ third successive game without a win with their last victory coming on January 2nd this year against Stoke City. Bournemouth have dropped to fifth with 42 points from 25 games.

Reading FC thrashed Coventry 3-0 with Michael Olise and Ovie Ejaria starting for the Biscuitmen in the win that took them to fourth on the log with 43 points from 24 games. The third Nigerian at the Royals, Sone Aluko replaced Olise in the 64th minute while Ejaria played for 78 minutes before being substituted.

Michael Olosunde who has ties with Nigeria despite given birth in England played full 90 minutes for Rotherham in their exciting 3-3 draw with John Mikel Obi inspired Stoke City. Freddie Ladapo came on in the 83rd minute for Rotherham in the game. The Potters are now seventh on the log with 37 points from 25 games.

At the Vicarage Road, Watford pipped Barnsley 1-0 with William Troost Ekong playing for 82 minutes before he was replaced. The Hornets are third with 43 points from 24 games.