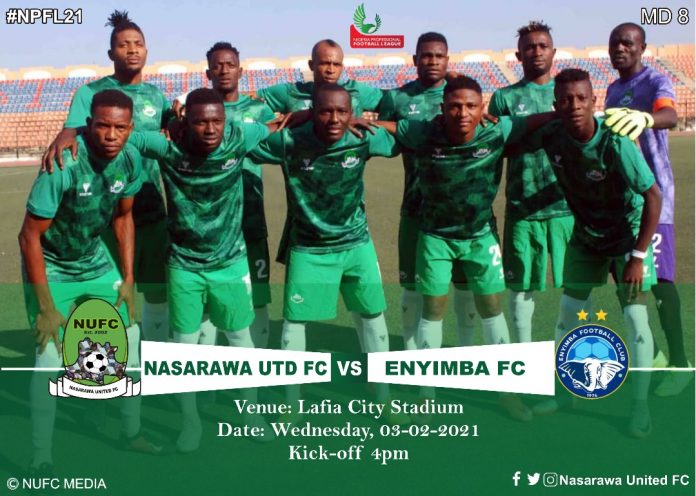 The Solid Miners will be looking to overturn their narrow 0-1 defeat to Plateau United during the Nigeria Professional Football League matchday seven cracker held at the New Jos Stadium Friday, last week as they play-host to Enyimba FC of Aba in the NPFL matchday eight fixture in the midweek in Lafia.

Though the Coach Bala Nikyu-tutored wards tasted defeat for the first time in this campaign in Jos last weekend, they are determined to return to winning ways again.

Just one point separates the two teams, with Enyimba occupying the 2nd position with fifteen points while Nasarawa United sit third with fourteen points, but with superior goals difference.

With no injury concern for the Lafia based club, hopes are high to see the Governor A.A. Sule Boys quickly return to the top of the NPFL table as they have no choice but to scoop the three points at the expense of the People’s Elephant.

Their guests have lost two games on the road, one more than the Solid Miners since the beginning of the 2020/2021 football season, and Nasarawa United are prepared to compound their poor away form when both teams clash on Wednesday in Lafia in what promises to be an action-packed clash.

Kick-off at the Lafia City Stadium is scheduled for 4pm, Wednesday, 3rd February 2021.

Nasarawa United lost 1-3 in the pair’s last meeting in Aba during the 2019/2020 League Season with the travellers conceding 2-0 in Lafia in the return fixture, courtesy of goals from Chinedu Ohanachom and Maigishiri Dauda before the league was aborted due to the outbreak of the deadly global coronavirus pandemic.

It is pretty difficult to guess which United players will be
available until the pre-match meeting, at a date and time to be confirmed.

Coach Bala Nikyu believes it’s not the time to get the boys distracted by fabricated opinions by individuals who don’t know the spirit of the team.

BEHIND CLOSED DOORS Due to the ongoing COVID-19 pandemic, fans are still not permitted to attend matches and all NPFL League fixtures are being played
without supporters inside stadiums, but we can keep you busy with our regular updates from the match venue.