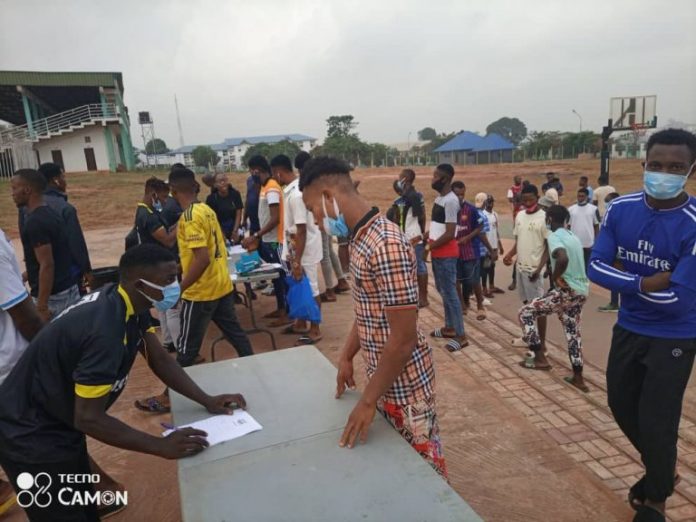 Over 750 players and officials from 27 teams that registered for the maiden edition of ‘My Anambra Football Super 8’ will undergo free COVID-19 and other pre-tournament medical tests which began on Wednesday at the Alex Ekwueme square Awka.

The medical tests as part of the competition’s programme is being sponsored by Aspire FC Adazi-Ani in partnership with the Anambra State Football Association (ANSFA).

Speaking to sportswriters, Chairman of the Super 8 Tournament Committee, Prince Oliver Ndigwe stated that over 800 persons made up of players, coaches and officials were expected to benefit from Medicare due to their various roles in the tournament. Ndigwe stated that the medical test will last for two days with Anambra Central Zone which started on Wednesday while Anambra South and North zones would be attended to on Thursday.

In her reaction, the Brand Ambassador of Aspire FC, Chidimma Ezeaso stated that the exercise is also part of efforts to increase health awareness among football clubs in observance of strict FIFA standard environment and to effectively handle COVID-19 related matters. She also emphasized that the health of the players is key in achieving the success story for the forthcoming ‘Super 8’.

On his part, a team official of United FA Amawbia, Dr. Chris Abakare, thanked the organisers for the noble project, he stated that they have done the needful in putting the safety of players and officials above all other considerations. President of DOSAD FC, Rev. Fr. Obinna Dike commended the medical team for a good job, he stated that the Super 8 will serve as a platform to unearth hidden talents from the grassroots level.

The ‘My Anambra Football Super 8 playoff’ is expected to hold between February 1st and February 7th, 2021 at the three senatorial zones of the state.