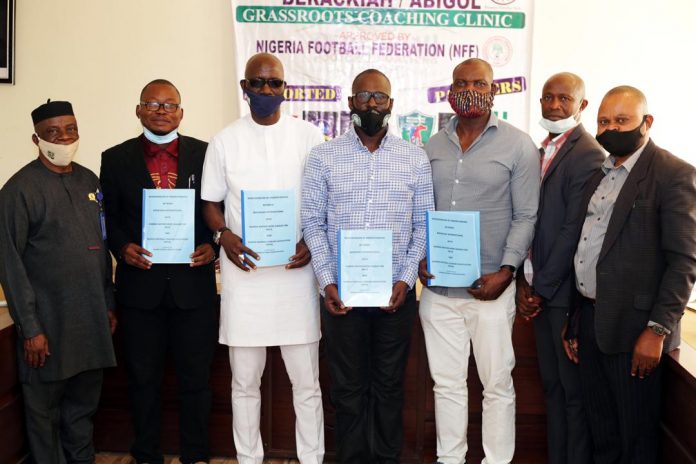 Earlier, the Executive Board of NFF had approved the coaching clinic in one of its Congress having identified with the aims and objectives of the organisers.

According to the MOU signed on Tuesday 12th of January at the NFF’s Sunday Dakoro House, the parties are expected to work together for a period of five years while organising similar programmes.

Berackiah Football Coaching Clinic is an initiative aimed at building and improving the capacity of grassroots football coaches in Nigeria.

The strategic working relationship binded by the MOU will see all the parties working towards the proper implementation of the project.

The president of NFCA, Ladan Bosso and Technical Director of NFF, Augustine Eguavon signed the agreement on behalf of their respective body.

Others who signed the agreement are Olorunleke Abraham, Managing Director of Abigol Football Management and Elder N.C.I Oyuonye of Association of Local Governments of Nigeria (ALGON) who are all partnering with project.

Wonder N. Wigwe, the CEO of Berackiah International while speaking with journalist said the partnership will go along way in achieving the crux of the project.

The clinic which will commence very soon have been billed for two venues each in all the geo-political zones across the country.

Sequel to the agreement, the management of NLO has however directed all the clubs in the league from Division one to three to participate in the coaching clinic billed for January to 25th – 20th of February.

It further recommended that three (3) coaches from each team are expected to register for the clinic noting it as one of its requirements for allowing team’s participation in the upcoming season.

Stressing the importance of coaches capacity in driving the league, the management said it will not take anything less from club Managers as regards qualifications.

A sum amount of #20,000 is expected to be paid by each participant as registration fee to the Berackiah designated account number.

Locations, Dates and venues for the clinic.