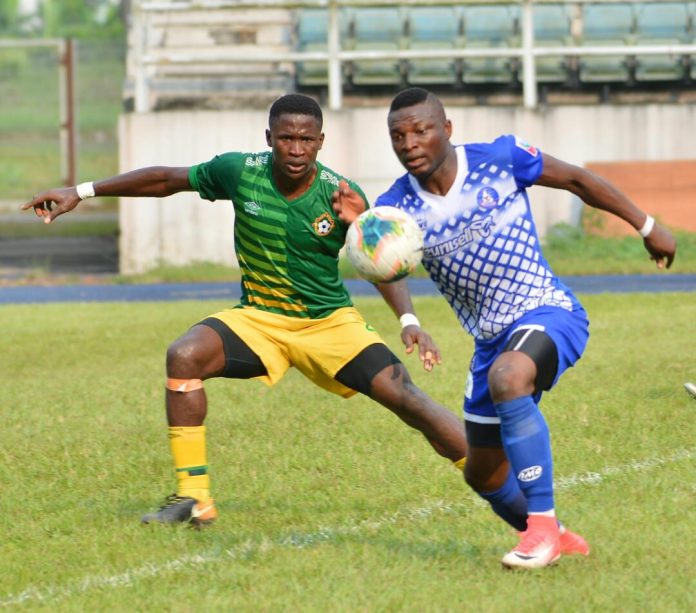 Kwara United strong defender Christopher Nwaeze has stated emphatically that the Harmony Boys are in Kaduna to pick the three maximum points against Jigawa Golden Stars.

Abdullahi Biffo and his wards will be seeking redemption on Sunday against Jigawa having drew their first game at home this season against Akwa United.

Christopher Nwaeze scored for Kwara United against Akwa United, but the central defender later turned villain after heading into his own net to give the visitors undeserved point in Ilorin.

Nwaeze while speaking with Kwara United media team tendered an apology to Kwarans on behalf of his teammates for their failure to beat Akwa United in Ilorin.

“I was very sad because we actually wanted to beat Akwa United and I want to beg Kwarans to forgive us and they should continue to have the believe in us.

“We came to Kaduna with anger and we are ready to correct our mistakes against Jigawa tomorrow in which we are going to get the three points,” the Flying Eagles star explained.

Christopher Nwaeze joined Kwara United last season from Crown FC of Ogbomoso and has established himself as one of the best central defenders in the Nigeria’s top flight.

His superb performances for Kwara United last term steered him to the Flying Eagles of Nigeria and was among the players who played at the Under 20 WAFU competition in Benin Republic.

Meanwhile, Kwara United will return home from Kaduna on Monday and start preparation for their next game against Enyimba on Wednesday at the Kwara Sports Complex in a rescheduled NPFL week 2 fixture.