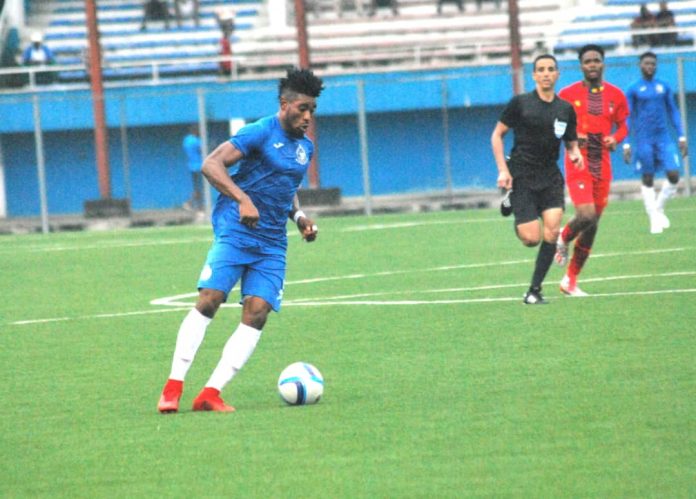 Enyimba striker Martins Usule believes that the People’s Elephant are on the right path after they eliminated TS Galaxy of South Africa in the playoffs round of the CAF Confederation Cup to cruise to its group stage.

The People’s Elephant defeated the South African Netbank Champions 4-1 on aggregate after two consecutive victories at the Enyimba Stadium, Aba and in the return leg played last weekend.

Usule who scored the back-breaking second goal in South Africa about eight minutes from time after Daniel Darkwah had shot the Nigerian champions ahead stated that they were delighted to seal a spot in the group stage and that they are eager to go a step further in the competition.

He said they benefitted from the fact that they played TS Galaxy first at home and that after they watched the videotape again they knew that they must prepare very well for the second leg so as not to allow the South Africans turn the table in the deciding leg.

The former Katsina United forward pointed that they had to return to the Temperance Hotel in Ota, Ogun State to perfect their strategies and take further instructions from the technical crew without distractions.

“I can boldly say that we have been doing the right thing and it is just normal that we should get the results that we have worked so hard for,” Usule told www.dasportstainment247.com.

“We were at advantage immediately the fixture indicated that we would host them first. We didn’t really know much about the players and the team but we were able to study them based on what we saw of them when we faced them in Aba.

“It was not difficult at all because we didn’t relax after that first-leg victory in Aba. We left for Ota the following day and we were able to continue with our training schedule as soon as we arrived there. It was a wise decision of the part of the management to camp us in Ota because we were able to concentrate on the second leg game with fewer distractions.”

Usule travelled with the rest of his teammates to Katsina the following day after they landed in Lagos from South Africa and the striker averred that they have shifted their attention to the weekend Nigeria Professional Football League tie against Katsina United.

He opined that defending the league title they won last season is high on the scale of their preferences and that they know that they must secure a positive result at the Muhammadu Dikko Stadium on Sunday to show that they mean business.

“We returned back to Nigeria on Monday night and we were able to rest a little before we embark on the trip to Katsina,” he continued.

“We are happy that we have the group stage ticket of the CAF Confederation Cup at hand but we must shift our attention to the league season also. We are the defending champions and we will be eager to defend it again.

“We must start the season well with a positive result in Katsina. It won’t be easy but we must be ready to fight for the points irrespective of the opposition.”

Usule joined Enyimba from Katsina United and the striker agreed that it would be emotional moments for him to file against the same team he helped to beat his present in Katsina in the last two seasons.

He promised to keep his emotion in check and ensure that Enyimba secure a positive result while returning back to Aba after the game on Sunday.

“It will be difficult to come up against my former team but as a professional player, I must be ready for that,” Usule added.

“I represented Katsina United very well throughout my stay there and I must focus on Enyimba now and on Sunday if I am picked for the game.”