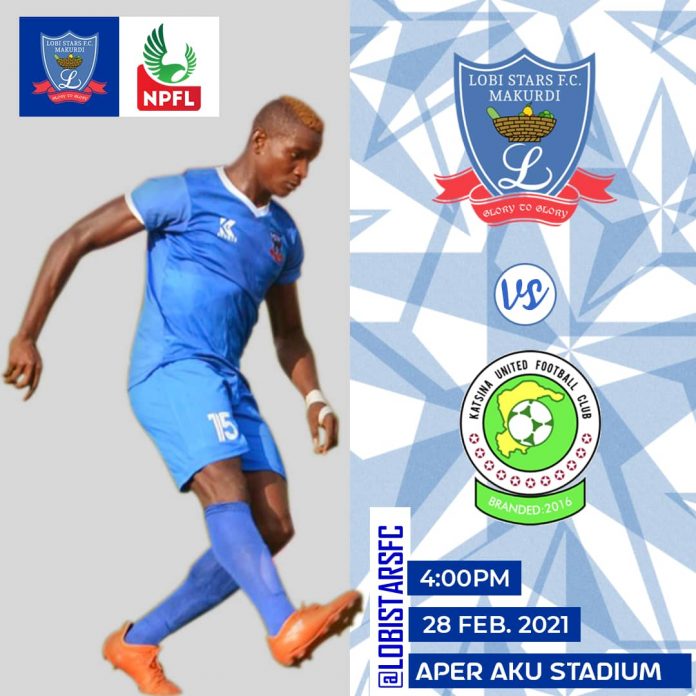 Amidst turbulence, Lobi Stars will on Sunday engage Katsina United in an NPFL Match Day 13 at The Aper Aku Stadium Makurdi, seeking to keep the promise made by the Vice-Chairman Mr. Mike Idoko to end the strings of bad results, having lost a heart breaking game last Thursday in Gombe to bottom-placed and lowly rated Adamawa United.

The Coach Kabiru Dogo tutored lads after 5 games winless run, stepped up their game against first seeded Kano Pillars and won. As if to say the era of bad results is gone, only to lose a harmless game against Adamawa which prompted vexed reactions from fans.

Katsina United is a good team that can spring surprises anywhere anytime, even though faring worse than Lobi on the log, placed 16th position with 14 points, just a step out of the drop zone can never be underestimated as they will be here to pull a result that will further move them from the drop zone.

Lobi Stars are currently 10th placed on the log with 16 points, looks unusual considering their pedigree over the years in the league, especially under Mike Idoko, will have to come out wholly to put the renewed spirit in to practice and win convincingly as a soothing balm for the aggrieved fans.

The pride of Benue have played a total of 6 games against Katsina United and each of the teams have 2 wins, 2 draws and 2 loses, which goes to show their near strength equality. Their last 5 Games still goes to show that the two teams are neck to neck statistically with each winning 2 games and a draw in between as shown:

In the final analysis, The Ortom boys will just have to play their hearts out to end up 3 points richer, as nothing less can be accepted by their teeming fans.