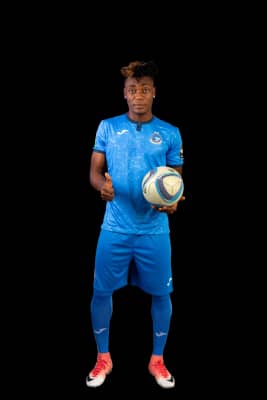 Samad Kadiri has admitted that he was not prepared to take the penalty that decided Tuesday’s League win against Abia Warriors.

Kadiri became the hero of his first Abia derby when he converted from the spot after Fatai Abdullahi handle the ball in the box shortly after the break.

The goal made Kadiri the next player to score on his NPFL debut for Enyimba after Martins Usule achieved same feat against Katsina United in November 2019.

It also extends Enyimba’s winning streak over their neighbours to five matches.

Kadiri, who missed Enyimba’s first three Champions League fixtures – mostly through injury – admits having jitters before holding his guts to displace Ojo Olorunleke for the game’s only goal.

“Definitely I will be under pressure because we needed a goal. Moreover, the coach called me to go and play (it). I didn’t prepare to play the penalty because I was away to drink water, but the coach asked to go and collect it and play the penalty. I had to (tell myself) ‘Samad you can do this’, then I went there and put it inside the net.”

The forward also spoke on the joy of eventually making his debut after struggling with an injury.

“Coming back from injury is not easy all this while, but most especially I have to give thanks to my coach for giving me this kind of opportunity to prove myself again. The confidence will start coming in a little bit.”