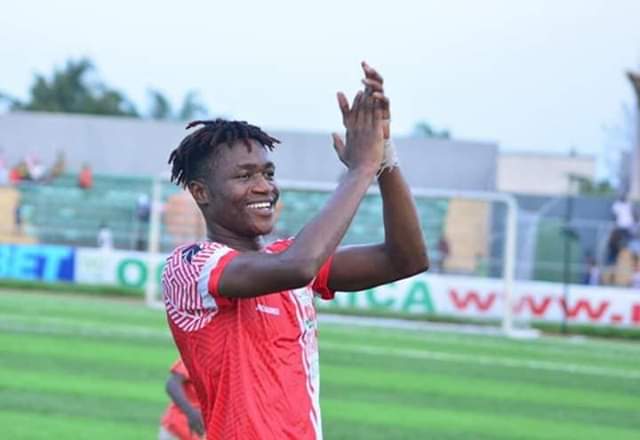 Heartland FC’s prodigy, Joshua Akhabue has sent warning signals to fellow Nigeria Professional Football League clubs, stressing that “other big clubs should watch out for Heartland FC this season.”
The defender who made this known in a chat noted that the Naze Millionaires are ready for the start of the season ahead of their home duel with MFM on Sunday.
“The new season is going to be a tough one with many games to be played and many long trips, too. Mentally, tactically, physically we are prepared,” Akhabue told Dasportstainment247.com.
The lad who made his premier league debut with Heartland last season in the abridge league format also spoke about his own preparedness considering the fact that this will his first experience of the normal league format.
“On my own part, I have always been ready. Right from the day I heard that we have resumed I made myself available and I am ready,” Akhabue told Dasportstainmment247.com.

“As a player, I know what I did last season and I know the expectations from the fans this season. They will expect me to do more, so I am ready.”
Akhabue joined Heartland last season after a stint with Delta Force in the lower division. He explains that he has learnt a lot since making his debut in the NPFL.
“It was a great opportunity and a dream come true, playing in the NPFL for Heartland FC. Last season I learnt so much under Mehmet Tayfun and from my teammates on and off the pitch,” he continued.

“That has given me more experience and the new coach Fidelis Ilechukwu has brought in more knowledge to my game by giving me some basics of how to play. With this, I am fully ready for the new season because the new coach has a winning mentality which he has imposed in the whole team. The coach has spoken to me personally and I have a good relationship with him. With him, we will go places this season.”
Akhabue who started out his career as a right full-back cemented his role in Heartland’s central defence last season with impressive performances and also scored some vital goals for the team.

He also fits well in the midfield. For him, switching roles is not a difficult task.
“As a player, you need to be prepared because you don’t know where your coach is going to tell you to play. It’s not difficult for me switching different roles because I have adapted so well and all I need is just instructions from the coach. That’s all.”
After last season’s outing where the club battled relegation up to the last day of the season, the former Delta Force defender believes he can help Heartland finish in the top 4 and also looks forward to a national team invitation and a possible move abroad.
“Last season we didn’t do very well, we fought relegation. But with the new management on the ground, new players, unity and oneness in camp coupled with the improved tactical aspect, we are being positive. So my expectations are to help Heartland get a continental ticket and with that, every other good thing will follow. I believe before the end of the season, I’ll get a call up to the national team and as well play professionally in Europe.
Heartland will host MFM in their opening game of the season coincidentally pitching Fidelis Ilechukwu against his former side. This will also be the first time MFM is visiting Okigwe since Heartland moved to their temporary home.