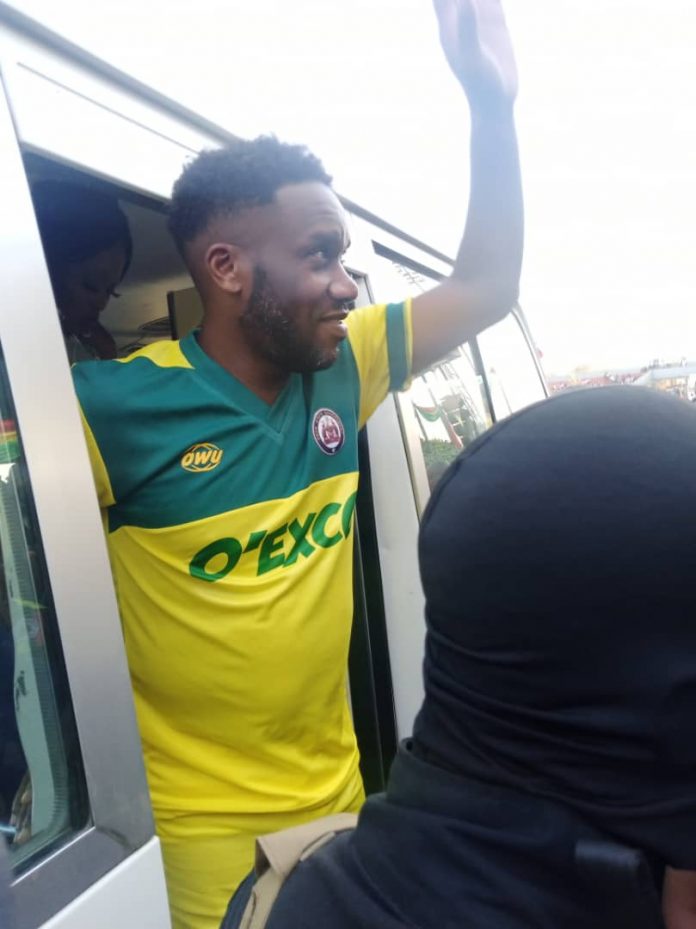 An injury time spot-kick, perfectly converted by the mercurial midfielder and former Super Eagles Captain, Austin Jay-Jay Okocha was all what Osun Executives needed to coast home a resounding victory over the Legislature in a novelty match played at the Osogbo Township stadium on Wednesday, December 2, 2020.

The match, organized by the Ministry of Youth and Sports Development was part of activities marking the 2nd anniversary of Governor Gboyega Oyetola’s administration where ex-internationals such as Ike Shorunmu, Mutiu Adepoju, Duke Udi, Bright Omokaro, Femi Opabunmi and several others featured to entertain thousands of football fans who came from far and near to see their favourite football icons live.

Possession in the first half of the encounter went in favour of Osun Parliament whose goalkeeper, Ike Shorunmu prevented Okocha, Femi Opabunmi, Bright Omokaro, as well as the Commissioner for Works Engr. Remi Omowaye, His Colleague in the Youth and Sports Ministry who is a lanky striker Mr. Yemi Lawal together and the bulky Special Adviser, Aremo Gboyega Adelabu from causing any havoc.

Speaker of the House of Assembly, Rt. Hon. Timothy Owoeye was the star of the game as he was a thorn in the flesh of O’ Exco defenders with his strong, left footed shots and ‘Bebetolike’ dribbles but his efforts did not pay off as the first half ended goalless.

The endowed, Jay Jay Okocha took control of the ball from the blast of the whistle in the second half and provided several assists which were wasted before Muyiwa Lawal was brought down in the 18 yard box by the hapless OSHA goalkeeper, who had been dribbled.

The former PSG and Bolton midfielder, Okocha was unarguably chosen by thousands of spectators chanting his name. The former Eagles captain didn’t disappoint his fans as he perfectly converted the spot kick to send the tumultuous crowd into a wild jubilation.

Earlier, the State’s Ministry of Works had defeated the Ministry of Health in a curtain raiser match at the same venue.

Governor Oyetola, who joked that the Exco’s victory was a beautiful revenge of last year’s loss to the Lawmakers lauded the two teams and saluted the ex-internationals for coming to associate and celebrate him.

The Governor reiterated his administration’s commitment to support and embark on policies and programs that will uplift the progress and development of grassroot sports across Osun.

“I am happy with the results of the match and I want to congratulate the two teams, particularly the soccer Icons for entertaining the crowd with artistic displays. We shall continue to invest in sports to create platforms for our teeming youth to be positively and appropriately engaged so that they can contribute meaningfully to the growth of our economy,” said Mr. Oyetola

Highpoint of the event was the presentation of trophies and medals to the ex-internationals, Ministries of Health and Works as well as the Osun Parliament and the overall winner, Osun Executives by Governor Gboyega Oyetola flanked by his Deputy, Gboyega Alabi, the Secretary to the State Government, Engr. Oyebamiji among others.