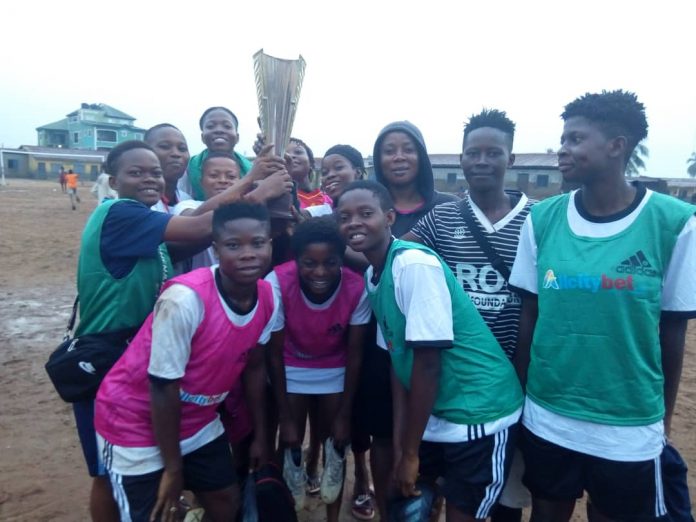 The tourney hosted in the boisterous city of Sango Ota, Ogun State near Lagos State was won by the newly formed team from Owerri after Oluchi Nwaokorobia and Chinwendu Ajoku goals propelled to victory despite the hostile condition.

The Owerri based side who are barely four months old were unbeaten throughout the tournament with three wins and two draws and they emerged as the champions having picked 11 points out of possible 15.

Impressive Striker, Chinwendu Ajoku ended the tournament as the highest scorer with four goals while she was closely followed by Chinedu Chinaka with three goals.

The champions also conceded the least number of goals (two) in their encounter with the second placed team, Prince Kazeem Queens FC of Ikorodu, Lagos which ended 2-2.

Team skipper, Adim Ogonna Francis who was overwhelmed with joy after they won the invitational tournament gave tribute to God and the sponsors of the team led by Chief Executive Officer, Ms. Jenny Anusiem and General Manager, Chuks Dike among others:

“Wow, I feel so excited that finally Imo Angels FC could lift the trophy in Ogun State. I’m very happy. I never believed that we could get to this position but we had the faith that we can get there and we were determined.

“Though we didn’t train for long before we were told about the competition but with determination, the power, the strength, the zeal and fasting, and prayers that made us sail through. We are grateful to God that made it to be possible. It wasn’t easy though.

“I will say a big thank you to our God who made it possible for us to come here safely and as we return home this morning we pray he leads us home safely too. And for our parents and families we left behind we are happy we made you all proud by coming home with the gold medal.

“We want to thank our CEO, Ms. Jenny Anusiem, and Our GM, Mr. Chuks Dike who both made it possible for us to be here. We want to also thank our TM, Sampson Orji who made sure we had a good lineup with the coaching crew for us to get to the top. We had a good fight and good competition that we have never had before. It was a good outing for us in our first competition since we were formed. We are always ready for any competition that comes our way,” she concludes.

Imo Angels FC are expected back in Owerri today.