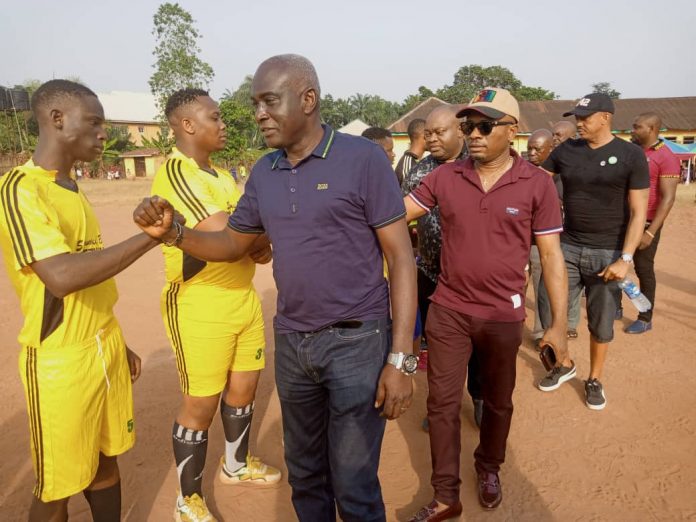 It was a show of who is who in football business in Imo State and Nigeria at large at the Central School Idume, Ogwa as Mr Ifeanyi Chukwudi, the General Manager of Heartland FC led some management members and the technical crew of Eastern Heartland darling football club to the kick off ceremony of the second edition of Omeziribe Foundation annual football competition among the 14 villages that constitutes Idume Ogwa Autonomous Community in Mbaitoli Local Government Area of Imo State.

The well-attended but entertaining and enterprising match started with Omaeke Village FC and Ugonenye Village FC which ended in a goalless draw with Prince Ronnis Eronini of Awo Mbieri and other eminent personalities in attendance amazingly doing the kick-off that reverberated the jam-packed arena.

Mr Uzoma Ibekwe, the founder and financier of Omeziribe Foundation which is Non Governmental Organization (NGO) that has been committed in building houses for indigent families, empowering youths, men and women as her social responsibilities of given back to the society.

Ibekwe who said he was motivated in sponsoring the annual multi million Naira football competition through his foundation as the Youth’s President of the autonomous community who’s committed in ensuring happiness among his people especially during the festive periods and to exhibit and harness sporting talents in the area and for the over all development of the society.

He also informed that the maiden edition was held between 19th December,2019 and January 6th, 2020 and that he has advanced plans to double the star prizes and consolation prizes won last year despite the economic devastation occasioned by Covid – 19 pandemic.

The Foundation sponsor described himself as a critical stakeholder in Heartland FC while canvassing the need for the club to harness dogged and courageous budding football talents, this he said instigated his willingness to partner with the management and technical crew in the overall interest of football development in the state.

Others include Prince Rollis Eronini, an oil magnate, Hon. Kenneth Emelu (War Lord) whom he said, God used to bring him closer to Imo State Government, Mr Kelechi Ejinkeonye, the Director General of the Foundation and Mr. Everest Ezihe, the Imo State Chairman of Sports Writers Association of Nigeria (SWAN) thanking them for their support and encouragement.

Earlier in his speech, the Director General of Omeziribe Foundation, Mr. Kelechi Ejinkeonye said that the Foundation was borne out of their youthful inspirational prayers and vow that whenever they grow and make money, they must positively change the idealogy and the historical narratives of the community.

Ejinkeonye described his employer as a blessing to their community, their generation and prayed for God’s abundant blessings and protection upon his life and family.

However, in his contributions, Prince Rollis Eronini commended the sponsor for his patriotism in associating with members of his community and enjoined him never to relent despite the antics of detractors and enemies of progress.