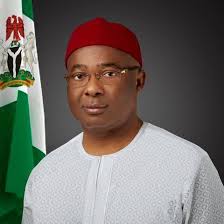 The Management and staff of Heartland FC Owerri have joined other well meaning Imo citizens to celebrate the peoples’ governor Senator Hope Uzodinma (Onwa Oyoko) the shared prosperity governor on his 62nd birthday.

General Manager of the team Chief Chukwudi Ifeanyi on behalf of the club said Governor Uzodinma has returned the peoples confidence in governance since he took over the mantle of leadership of the state.

He said the entire staff of the Naze Millionaires joins the governors friends, well wishers and good spirited citizens of the state to celebrate him, adding that under his watch in the past eleven months Imo has experienced quality leadership, continuity in the affairs of governance ,and people-oriented policies.

The GM also said that as the governor celebrates, they at Heartland FC join the entire Ndi Imo to felicitate with him and assure him of the club’s unalloyed support in his effort to improve the living standard of the people and urged him to sustain the spirit of good leadership he has bestowed on the state these few months.

He prayed God to bless him with the wisdom, knowledge and understanding with which to pilot the affairs of the state for the betterment of its citizenry, adding that the club would work to improve the support base of the shared prosperity administration in the years ahead.