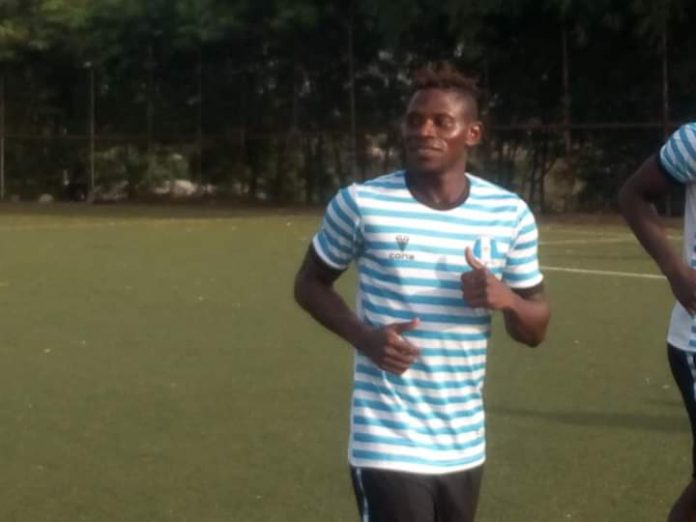 The 3SC defender’s two goals in the tourney, which he scored in the team’s 5-1 whitewash of FC Nilayo, puts him on top of the scorer’s chart, sharing the position with Kwara United’s Michael Ohanu, who has also netted twice.

Incidentally, Ohanu’s’ two goals were also against FC Nilayo who are in the group C with the Oluyole Warriors, the Afonja Warriors and Remo Stars.

Benson, paired with inspirational skipper, Omololu Waheed in the heart of the Shooting Stars backline, formed a formidable defence made up of right back Muritala Taiwo and left back Amodu Nurudeen with Anas Muhammed joining the fray later, to shield the opponent from troubling impressive Charles Tambe in gioal for the Stars.

However, the hardworking defender capped his brilliant performance in the encounter with a brace, one goal in each half to help the Stars to a convincing win in the tie decided at the pitch 1 of the Dipo Dina Stadium, Ijebu-Ode.

He got the Oluyole Warriors’ second goal, his personal first in the 25th minute before adding the team’s fourth, which was his own second goal of the day in the 69th minute of the encounter.

Apart from Benson’s feat, the Ibadan soccer lords have scored the highest number of goals after match day three, having scored five goals, despite playing just a match so far.

The 10 seconds’ opener against FC Nilayo, scored by energetic forward Gafar Olafimihan, also remains the fastest goal of the competition so far.

The Edith Agoye tutored Shooting Stars hope to continue with their blistering performance as they take to the pitch against Remo Stars on Friday morning.

Ohanu has been inspirational for Kwara United on his second stint with the Harmony Boys churning out impressive performances in the pre-season games he has taken part in.

He will be pivotal to Kwara United’s quest to win the Governor Dapo Abiodun Pre-season Tournament ongoing in Ijebu Ode.