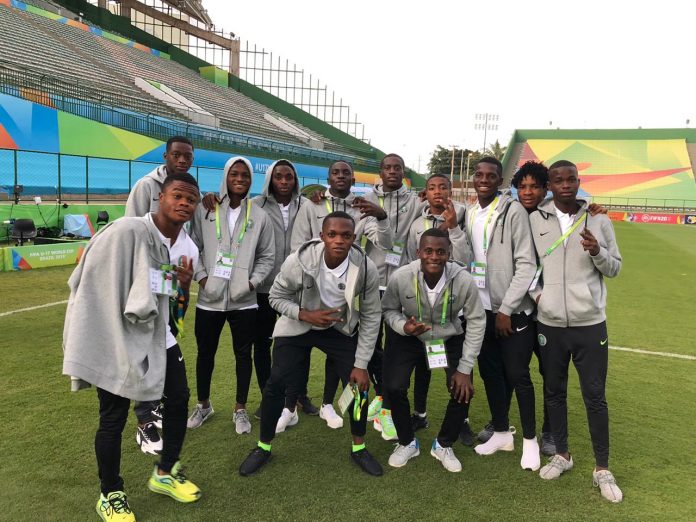 Nigeria’s Golden Eaglets suffered their first defeat of the ongoing Brazil 2019 FIFA Under 17 World Cup after they were narrowly beaten by Australian U17 team 2-1 in the deciding Group B tie played at the Estadio Bezerrao, Gama on Friday night.

The Eaglets already bagged a second round ticket after their consecutive victories over Hungary and Ecuador but their second-string side failed to get the better of the Junior Kiwis and had to settle for their first loss of the competition.

The Nigerian cadet side were behind as early as the 14th minute when Tristan Hammond found Noah Botic in a promising position to put Australia ahead but the Eaglets levelled the proceedings seven minutes through the hard work of Peter Olawale.

The Golden Eaglets were guilty of missed chances just like it has been their hallmark in Brazil and their efforts to increase the tally were nullified by the tactically disciplined Aussies who knew that anything other than a positive outcome could see them return back home early.

The first half ended 1-1 apiece but it was the Asian side that shot ahead again through the same Botic from the penalty spot after the Video Assistant Referee spotted an infringement in the Eaglets’ vital area in the 54th minute.

Nigeria afterwards dominated the game but they met a very disciplined and determined Aussies to contend with. Akinkunmi Amoo was a torn in the flesh of the Australian but his best effort to equalize the game in the dying minute of the game was cleared on the line.

There was no late heroic of the last two games as the Eaglets under the tutelage of Manu Garba could not muster a fight-back to ensure that the game ended 2-1 against Nigeria.

Despite the loss, the Eaglets still topped the group ahead of Ecuador, who beat Hungary 3-2 through the last gasp goal, on goals difference (after both teams finished the group stage games on six points each) and they move ahead to the second round along with the South Americans.

Australia who finished third in Group B with four points will have to wait until the conclusion of the group stage matches to know if they will proceed to the next round or join Hungary in securing their flight back home.

The Eaglets will return back to Estadio Olimpico, Goiania for their second-round clash with either of the third-place team in Group A/C/D on November 5