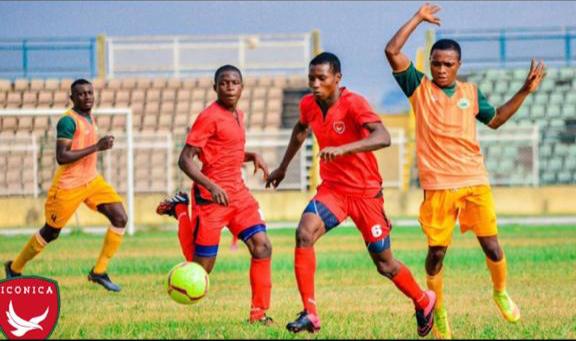 Gateway opened the scoring from a penalty spot but that lasted for three minutes as Adeyemo Emmanuel levelled for Iconica FC.

The pressure from Gateway United was too much for the visitors as they conceded yet another penalty.

The home side went ahead from the second time in the 22nd minute to make it 2-1 and followed up with another in the 30th minute.

The game looked home and dry as more Gateway United combined so well to score from open play just before half time to conclude an all-action first half in Abeokuta.

Iconica FC trio of Idowu Quadri, Adeyemo Emmanuel, Animasaun Teslim pushed forward to restore pride to the Ibadan based team and was rewarded in the 75th minute as they combined so well to make it 4-2.

The home side put finishing touches to what they began in the first half as they got the fifth for the day to make it 5-2.

Iconica FC a non-league side held their heads up high as they hope to pick the positives from the friendly.