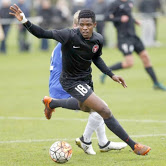 Midtjylland midfielder, Frank Onyeka said it took him time to keep up with the reality that his closest friend at the Danish club, Paul Onuachu has left him for the Belgian league.

Onyeka told SportingLife that his bond with the Super Eagles beanpole attacker made them inseparable both on and off the pitch but that he was delighted that he secured a big leap in his career with his movement to Genk which has presented him with the chance to play in the Uefa Champions League with his new club.

“I missed the ever-lively presence of Paul Onuachu because we shared a very great relationship,” Onyeka told SportingLife.

“In the dressing room and outside it we are always together but when he left I was alone and sad for some time because I am the only Nigerian in the team right now. I had to make new friends with my other teammates.

“I was sad when he left but still it was a big step from leaving the Danish League for Belgium. It is nice for him.”

The midfielder who featured for the Olympic Eagles in the first leg tie with Sudan also asserted that he is thrilled with the Nigeria U23 team’s qualification for the 2019 U23 AFCON holding in Egypt in November.

“It is a privilege playing for the Under 23 national team,” he continued.

“We knew we lost the first leg in Omdurman last week and we knew only a positive outcome would land us the ticket to 2019 Under 23 AFCON. It turned out to be an easy game for us because we won the game by 5-0 in Asaba.

“I could not take part in the game because two days before the match I was sick. I am in agreement with the coaches’ decision not to risk me for the game even though had recovered from the ailment. It was a nice feeling because we won the game eventually.”